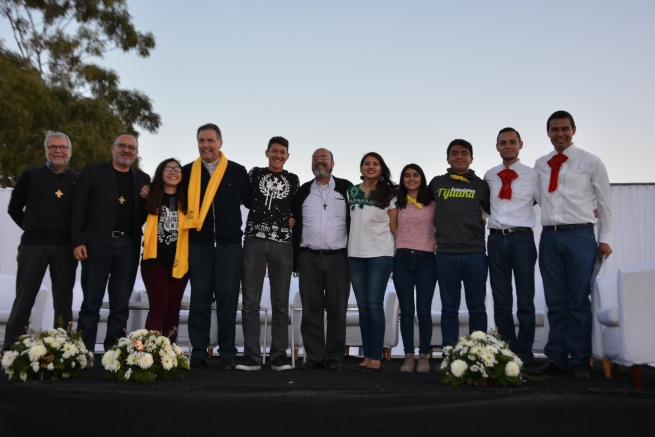 (ANS - Tijuana) - The stay of the Rector Major, Fr Ángel Fernández Artime, in Mexico, was brief, but his passage in each place and his words will remain long in the hearts of lay people, Salesians, Salesian Family and above all the local young people. The last two days were characterized by visits that were deep and deeply moving. The X Successor of Don Bosco was able to see the work being done by Salesians with the young, the poor, the immigrants.

To the prenovices, the elderly Salesians and the novices from the Antilles, Ecuador, Haiti and Mexico, he said, "It is not enough to be with the young ... We Salesians have the young in our hearts, the neediest ... And first of all we are men of God. God is at the center of our lives."

In Tijuana he was with the young people of the Salesian Youth Movement. "What would Don Bosco do in Tijuana, on the border?", asked a young man. "The question is not easy," the Rector Major replied. "Don Bosco did not have recipes for every situation ... But I am convinced he would not have looked for what to do, because he was certain of what he felt in his heart: a boundless love for his children. Don Bosco would have tried to take care of the adolescents, so that no one would ensnare them."

Saturday 21 was the Rector Major's last day in the Mexico-Guadalajara Province and the reality of immigration was at the center of his attention. In the Salesian Refectory "Padre Chava" he presided over the Eucharist with the Salesians and their collaborators who, together, assist more than a thousand people every day. Underlining the difference in motivation between a social center and a Salesian center, he recalled that "Don Bosco's criterion was charity for the most needy, especially for young people."

Then, in the area known as "the lighthouse", where the border line between Mexico and the United States begins, he personally observed the drama of countless families divided by a wall: on the Mexican side, fathers and mothers who'd been expelled; on the American side, children and young people who, having been born in the USA, could stay there.

In a moment of sharing with his confreres, the Rector Major made it clear that what was being done by the Salesians on the border was good, but it was not yet enough: "We must do more."

He also expressed this same conviction in a video.