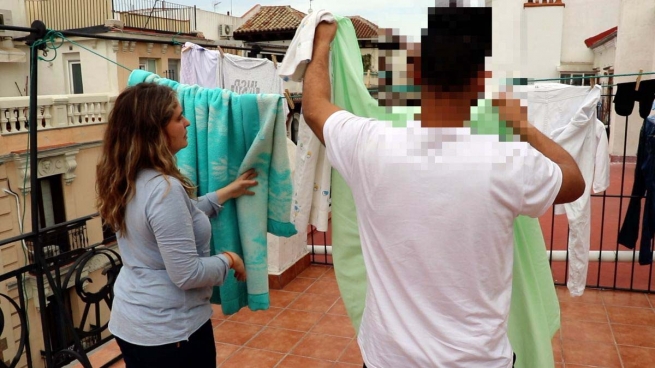 (ANS - Sevilla) - They come from different countries, with different cultures, but they have something in common: they have left their places of origin due to conflict or persecution. They are the young refugees welcomed by the Salesians through their social platforms in Madrid and Seville. "After leaving Iran, I crossed through 10 countries, and they told me I could not stay. In Pinardi-Nicoli, they welcomed me," says one of the young men.

The full reception program for vulnerable young refugees was launched in mid-February, with financial support from the Ministry of Labor and Social Security. It is expected that at the end of the year the social platforms will have served 40 young people between 18 and 30 years, from Asia, Africa and Latin America.

In Madrid, the Pinardi Federation has launched, together with the Daughters of Charity, the Pinardi-Nicoli project, enabling the two reception houses to serve a total of 10 young refugees, for now. Four educators from Pinardi and a Daughter of Charity have the task of helping them to manage their daily activities at home. Another apartment is located in the province of Seville, with four refugees served by the Don Bosco Foundation.

The young people receive Spanish lessons, learn local customs and in their free time study in their rooms. Among classmates, household tasks are distributed according to a predetermined program: sweeping, washing clothes, making beds, cooking, preparing the table, making purchases on a reduced budget ... All of this contributes to generating a pleasant atmosphere.

The program allows them to spend a maximum of six months in the apartment. In this time frame, the immigration documents are prepared and managed so that they can finally stay in Spain. The role of Salesian social platforms is fundamental in enbling them to be socially inserted after learning the ocuntry's language and customs.

Spain, like many other European Union countries, is moving slowly in the reception of refugees agreed upon on September 2015. The EU has committed itself to receiving 160,000 people, including 17,000 in our country. After almost three months of activity, the Salesian social platforms are an example of how refugees can, indeed, be welcomed.