Paraguay - Rector Major: "be careful not to forget that the most important thing in our centers are the boys and girls" 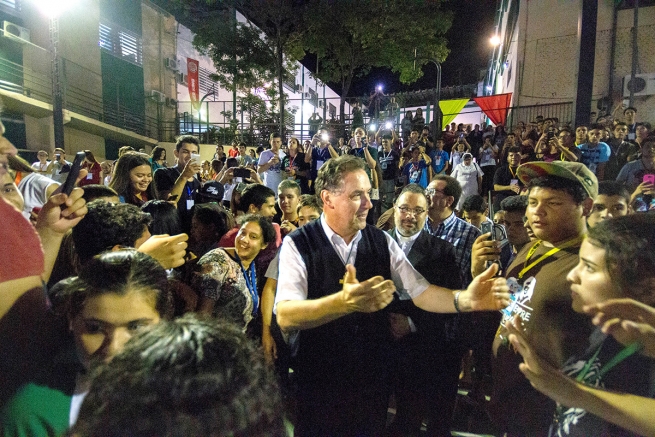 (ANS - Asunción) - The Rector Major of the Salesians, Fr Ángel Fernández Artime, accompanied by his Secretary, Fr Horacio López, arrived in Paraguay on the night of Monday 30 April and received a warm welcome at the Salesian Institute "Mons. Lasagna". Thus began his visit to the Salesian Province of Paraguay.

Fr Á.F. Artime landed on Guaraní soil at around 10:30 pm. Subsequently, at the institute "Mons. Lasagna" he found circa 500 young people of the SYM to welcome him with songs, burst of firecrackers and a human cordon that escorted him to the center of a stage on which the Rector Major danced the choreography of the song "San Juan Bosco, bienvenido" with all those present.

"I am very happy to be here with you," the X Successor of Don Bosco then said. "That dream that Don Bosco began is alive more than ever," adding that, "the reality of our Salesian Youth Movement, the missionary group, the animators, the catechists, is a beautiful worldwide reality ... Just look at you!"

Tuesday, May 1, activities continued according to schedule. At the start of the morning, he received the tereré drink from several young people, then visited the "Don Bosco Róga" Foundation, made himself available for a press conference and met the students of the institute "Mons. Lasagna". At the end of the day, he celebrated Mass in the Shrine of Mary Help of Christians.

"Be careful not to forget that the most important thing in our centers are the boys, the girls, who are waiting for us, and among them, the most vulnerable, the most fragile, and as Pope Francis says, those that society discards," said the Rector Major. "This is the hallmark of every Salesian house. And I take this opportunity to tell my Salesian brothers, the lay educators and the people who collaborate in this Salesian house: thank you, as you make Don Bosco's dream come true!"

"Don Bosco," he concluded, "was wonderful, a great man. The Church has called him Father and Teacher of Youth. St. John Paul II proclaimed him Patron of all the young people of the world ... Don Bosco could not have continued his dream had it not been for all of us. We must feel ourselves to be continuators of his dreams."

The photos of the visit are available on Flickr