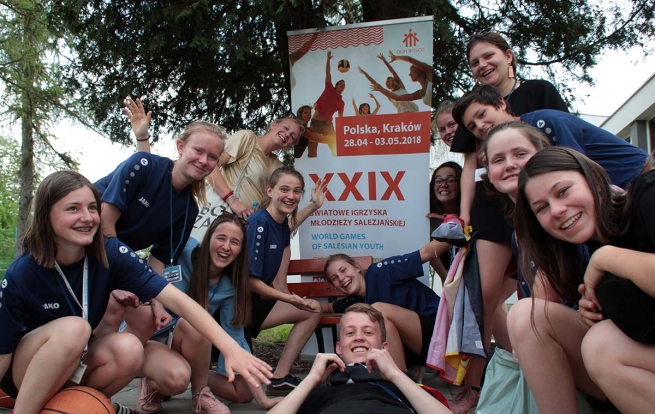 (ANS - Krakow) - On Sunday, 29 April, the 29th edition of the International Salesian Youth Games officially began in Krakow. Ending tomorrow, 3 May, the event involves about 2000 participants, including young athletes and their supervisors, from 23 countries on 4 continents, who compete in: Football, Volleyball, Basketball and Table Tennis. From 1 to 3 May, the sporting event takes place in conjunction with another major youth event: "Savionalia."

The purpose of the International Salesian Youth Games is to offer young people an opportunity to compete in sports and build a better society through sport based on Christian humanism and respecting fundamental values such as peace, friendship, justice, solidarity and fair play.

To coordinate the initiative of the Games, as the main organizing body, there is the Salesian Sports Organization of the Polish Republic (SALOS RP) led by President Zbigniew Dziubiński; while the Patronage of Honor is assigned to the Prime Minister of the Polish Government, Hon. Mateusz Morawiecki.

On Sunday, 29 April, the first day of the event, the young people and their guides and supervisors also took part in the Mass presided over by Fr Tadeusz Rozmus, SDB, Regional Councilor for Central and Northern Europe. Subsequently, after a lively parade through the streets of the center, the solemn opening ceremony of the event took place in the Maximum Auditorium of the Jagiellonian University.

Monday, April 30, while the athletes continued in their eliminatory competitions, as well as participating in various extra activities prepared for them - outings, walks, visits and concerts - there was the assembly of the Polisportive Giovanili Salesiane Internazionale (PGSI) in the afternoon.

Given the event's coinciding with "Savionalia", the organizers of the two events scheduled several meetings together: on the evening of May 1, during the prayer vigil in the Shrine of Divine Mercy in Łagiewniki; and on Wednesday, May 2, on two occasions: during a "flash mob" in the Market Square and then at the great international Salesian festival featuring picnics, concerts and the awarding of the winners of the International Games.