Paraguay - Mgr. Gabriel Escobar, SDB, to Rector Major: "Thank you for taking us the living source of faith and for confirming us in this missionary vocation" 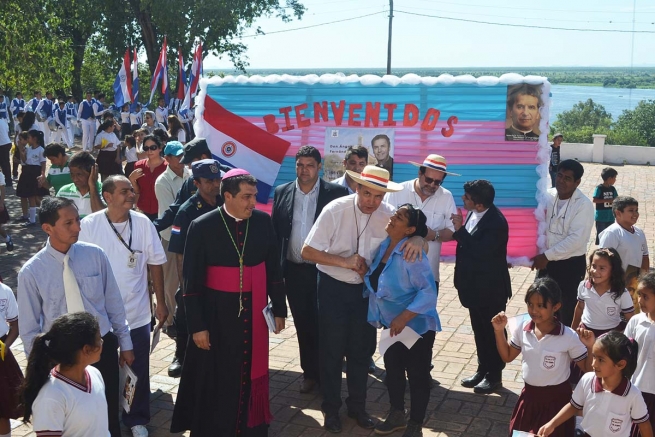 (ANS - Fuerte Olimpo) - The first village in the Chaco Paraguayo region reached by the Rector Major, Fr Ángel Fernández Artime, in his Animation Visit in Paraguay was the city of Fuerte Olimpo, capital of the Department of Alto Paraguay and of the Apostolic Vicariate of Chaco. In this city, Fr Á.F. Artime was declared an honorary citizen, receiving recognition from the civic authorities and declared an illustrious visitor.

Yesterday Thursday 3 May, Salesian Msgr. Gabriel Narciso Escobar Ayala, bishop of the Apostolic Vicariate of Chaco Paraguayo, welcomed the X Successor of Don Bosco at the local airport, then escorted him to the majestic Cathedral dedicated to Mary Help of Christians, where children and young people of different educational institutions welcomed the Rector Major with an artistic-cultural exhibition.

Mons. Escobar thanked the Rector Major for fulfilling his promise to visit the vicariate of Chaco Paraguayo. "Your presence helps us to confirm our faith in unity and in love and invites us to be defenders of life, to be instruments of peace and justice. Thank you for bringing us the living source of faith and for confirming us in this missionary vocation, so that we can give answers to the existential peripheries in which we are called to work," said the prelate.

Then Mr. Leonardo Lezcano, Director of the national school "Mons. Dr. Ángel Muzzolòn ", dedicated to the first Salesian bishop of Chaco Paraguayo, presented the Rector Major with the works carried out by this great priest and Salesian missionaries in the educational field.

On his part, the X Successor of Don Bosco thanked participants for the demonstrations of affection, while reiterating that he did not accept these tributes on a personal level, but as gestures of thanksgiving to the great Salesian Family, which has been serving the population of the Chaco Paraguayo for over 70 years.

The X Successor of Don Bosco then flew to the educational center "Ñu Apu'a", which hosts children of the rural and indigenous population in a boarding house, which allows them to study. Afterwards, the Rector Major reached the city of Carmelo Peralta, located on the banks of the Paraguay River.

The visit of the Rector Major to the Chaco Paraguayo ends on Saturday 5 May when, after having visiting Puerto Casado, Fr Á.F. Artime shall return to Asunción.