Uruguay - Rector Major in Uruguay for the first time: "United for young people" 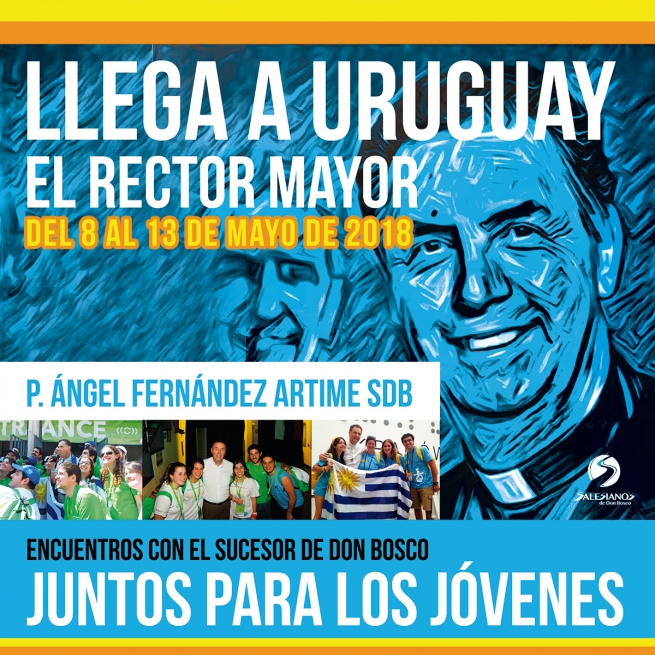 (ANS - Montevideo) - For the first time, today, Tuesday 8 May, the Rector Major, Fr Ángel Fernández Artime, reaches Uruguay. His visit, which will last until May 13, has as its motto: "Meeting with the Successor of Don Bosco ... United for young people!"

The Rector Major arrives at Carrasco International Airport at 9 pm (local time) on Tuesday, 8 May. There he will be welcomed by the Provincial, Fr Alfonso Bauer, and the Superior of the Daughters of Mary Help of Christians, Sister Laura Guisado, together with a delegation of young people working in the area of Provincial Communication and of the Salesian Youth Movement (SYM).

Wednesday, 9 May, the agenda of the Rector Major foresees a meeting in the Presidential House with the President of the Republic, the Hon. Tabaré Vázquez, who used to go to the oratory as a boy.

Subsequently, the Rector Major shall meet with members of the Provincial Council, and have lunch with the bishops of the various dioceses of the country. In the afternoon, he will visit the Daughters of Mary Help of Christians in Las Piedras, not far from Montevideo, and then visit the "Minga Project", an integral socio-educational proposal for children at risk.

Thursday begins with the Eucharist in the Provincial House together with aspirants and young people in vocational paths. Then he will take part in the celebrations for the 125th anniversary of the "Talleres Don Bosco" and the 50th anniversary of the "Paiva Institute". In the evening, he will attend a prayer meeting for young people called "Hay Algo Más" (There's Something More).

On Friday 11, the Rector Major will participate in the meeting with the Salesian house management teams on the outskirts of Montevideo, while in the afternoon he will dialogue with the Salesians at the "Istituto Maturana".

Saturday morning, 12, he meets with members of various communication teams of the Uruguayan Province, at the headquarters of "Radio Oriental 770 AM", then continues to a meeting with the leaders of the different groups of the Salesian Family.

Because of his presence, it had been decided to anticipate the celebrations for the feast of Mary Help of Christians. Thus, early afternoon on Saturday, the procession begins with the statue of the Virgin, followed by the Eucharist, presided by the Rector Major, in the National Shrine of Mary Help of Christians - where more than 2,000 people will be expected. Finally, in the afternoon, Fr Á.F. Artime will participate in a meeting with the Salesian Youth Movement at the "Colegio Pío" in Montevideo.

On his last day in Uruguay, Sunday, May 13, the day on which Saint Maria Domenica Mazzarello is commemorated, the Rector Major will meet with the Daughters of Mary Help of Christians in the provincial house of Villa Colón, before reaching the Carrasco airport to embark on the journey back to the Salesian headquarters.