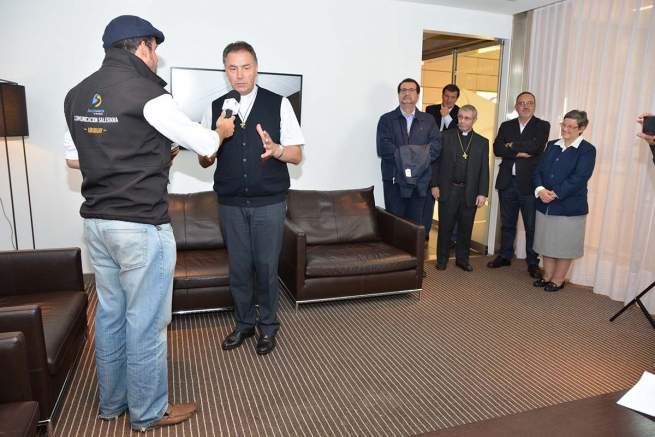 (ANS - Montevideo) - "I dream of encountering the 'sympathy' of young Uruguayans," said the Rector Major, Fr Ángel Fernández Artime, on arriving in Uruguay on the night of Tuesday, 8 May. Coming from Paraguay, the Rector Major landed at the Carrasco airport at 9:40 pm, together with his Secretary, Fr Horacio López, and the Regional Councilor for the America South Cone, Fr Natale Vitali.

Fr Alfonso Bauer, Provincial of the Uruguayan Province, and Sr. Laura Guisado, Superior of the Uruguayan Daughters of Mary Help of Christians, together with several Salesians and a group of young people from the Salesian Social Communication team, received him.

After a first exchange of affectionate greetings, the Rector Major was interviewed live on Facebook by two young people. The young broadcaster offered  mate (infusion made with leaves of mate grass) to the Rector Major, while the other member of the team explained to Fr Á.F. Artes that the mate for the Uruguayans is a symbol of  "an encounter and an opportunity". "We want this visit to be a meeting and an opportunity to fully live the extraordinary charism of Don Bosco," the two young reporters said.

"We come here with great enthusiasm," added the X Successor of Don Bosco. "We come with our hearts well prepared for the meeting of these days in Uruguay, willing to give our best. I really want to meet my brothers and sisters and the rich context of Salesian educators and of the Salesian Family who, I believe, in all humility, are fulfilling the dreams of Don Bosco, because today we must be the ones who bring them forward."

Subsequently, the Rector Major emphasized that the days to come would be "days of meeting, sharing, mutual listening, but also to be able to say a word about what one is experiencing and feeling for the world." Fr Á.F. Artime then specified this was not the first time he had touched Uruguayan soil, although it was his first time as Rector Major. "I've already had the chance to know the capacity for hospitality and the empathy of the Uruguayans and I think they will be beautiful days," he said.

Uruguay is the Rector Major's 62nd visit to a Province and the 77th to a country in his over four years of animation and government of the Salesian Congregation.