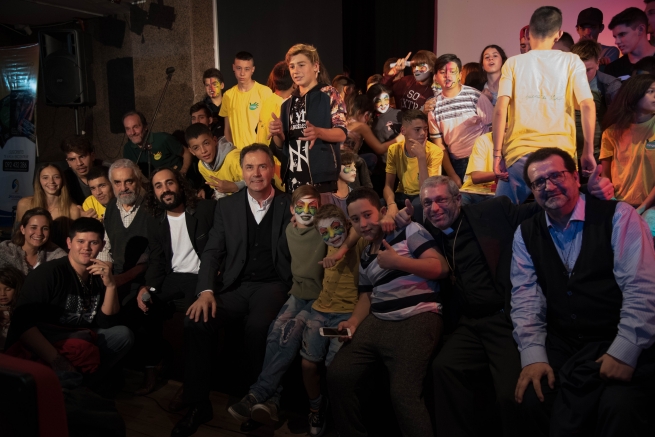 (ANS - Montevideo) - Yesterday, Wednesday 9 May, the Rector Major, Fr Ángel Fernández Artime, experienced an intense series of activities in Uruguay: first the meeting with the President of the Republic, then the meeting with the Salesian Provincial, Fr Alfonso Bauer, and his Council, followed by lunch with the bishops, a visit to the nursing/rest homes of the Daughters of Mary Help of Christians, another to the Minga Project center and, finally, he participated in the thanksgiving event by this last towards the community of Las Piedras.

At 9 AM, the Rector Major, accompanied by Fr Bauer and Fr Marcelo Fontona, SDB, was received by the President of the Republic, Hon. Tabaré Vázquez, at the presidential residence "Suárez y Reyes". The X Successor of Don Bosco thanked the President for the cordiality of the meeting.

Immediately afterwards, the Rector Major and the other Salesians went to the Provincial House to receive the greetings of the bishops, and shared lunch.

In the afternoon, the Rector Major, with Fr Horacio López, his Secretary, the Regional Councilor for the South Cone America Region, Fr Natale Vitale, the Provincial and other Salesians, reached the city of Las Piedras, 20 km from Montevideo. He visited the "Madre Promis" nursing home of the Daughters of Mary Help of Christians. He then visited the Minga Project house, which offers a complete educational and social assistance service for adolescents and young people at risk.

Fr Á.F. Artime then moved a few blocks away to reach the auditorium "Batalla de Las Piedras", where he participated in a thanksgiving event by the Minga Project to local citizens, an event that opened with the consignment of a plaque to the mayor of the city, Gustavo González.

The X Successor of Don Bosco also expressed his thanks, "from the heart and on behalf of Don Bosco." He admitted to feeling deeply moved and touched and added: "Don Bosco would be happy here today."

In his speech, he also added, "Don Bosco told us that in the heart of every boy, however difficult it may be, there are seeds of goodness." And addressing the mayor, he expressed his gratitude and observed, "We have something that unites us: it's them, the children, the young ... Being able to do something for them is the most serious thing there is, I would even dare say sacred!"