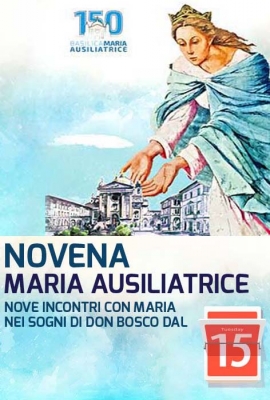 (ANS - Rome) - The "global" novena to Mary Help of Christians begins today, 15 May. To participate in the novena proposed by the Rector Major to the entire Salesian Family, all nine videos in Italian, English, Spanish and French are currently on the web, and the videos of the first days in Portuguese and Polish editions.

"I will give you the Teacher," little John Bosco heard being said in his dream as a nine-year-old boy. "She did everything," a mature Don Bosco would later say, almost at the end of his life, as he thought back to the many challenges he had faced and overcome for his young people. Our Lady had always been a close presence in the life of Don Bosco and he never tired of repeating it and encouraging people's devotion to Her.

This year, which celebrates the 150th anniversary of the consecration of the Basilica of Mary Help of Christians in Turin, the novena proposed by the Rector Major to the whole Salesian Family focusses on the dreams of Don Bosco wherein the figure of Mary Help of Christians emerges, and follows the same thread of the reflections being used for the procession in honor of Our Lady which, as per tradition, is held on the evening of May 24th in the streets of Turin.

In each video, the Rector Major presents the dreams of Don Bosco, which are then discussed and supplemented with Marian testimonies by different members of the Salesian Family. Discussed are themes such as: the Salesian mission, the spiritual life, the missions to the farthest corners of the earth, Salesian holiness... Always from a Marian point of view.

Finally, on the last day of the novena, the Rector Major shall present what is his dream for the Congregation and the Salesian Family.

The videos can be found at www.sdb.org; and the ANSChannel on YouTube.

Starting from next Monday, May 14th, videos in French, Portuguese and Polish will begin to be uploaded and made available to users.

Thanks to the collaboration between the Dicastery for Social Communication and the Communication Team of the Southern Italy Province, a written Italian-language aid was also produced featuring the entire texts of the novena.