Uruguay - Rector Major: "Commitment and life pass through a personal and profound experience of God" 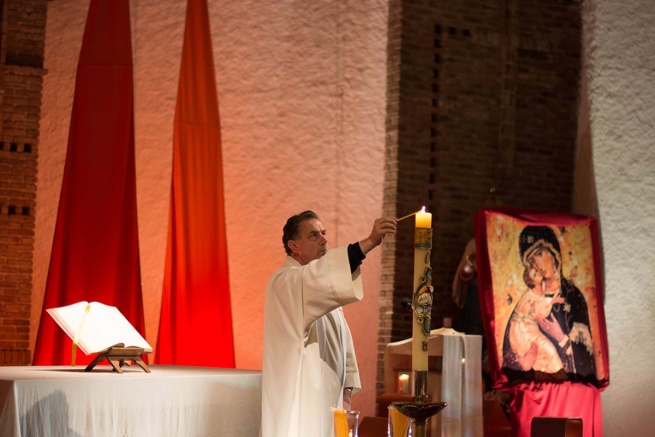 (ANS - Montevideo) - On Thursday morning, 10 May, Fr. Ángel Fernández Artime, Rector Major, began his day by presiding at Mass for aspirants and young people in vocational discernment in the Provincial House. Later he went to "Talleres Don Bosco" for the celebration of the 125 years of the center that combines offering work skills with the development of values, and for the 50 years of the "Benigno Paiva lrisarri" institute, a Salesian house for teenagers located in the countryside around the small town of Sarandí del Yí, in the department of Durazno.

Because of the anniversary celebrations, the center's theater, "Talleres Don Bosco", was full of young people. Two educators presented the event, while the Rector Major answered questions and spoke about his recent experience in Syria: "We were in Damascus, in Aleppo ... Some things if you do not see them you cannot understand ... What you see on television, little, is even distorted ... What struck me most was meeting the more than 230 animators of the oratory, young people like you, university students, who, despite living in the ruins, were full of hope, smiles, and they were neither bored nor desperate, nor did they complain or cry ... It was a pleasure to receive their smile, their embrace, their enthusiasm."

In the early afternoon, Fr Á.F. Artime gave an interview to the program "La tarde en casa". He spoke about his vocation, his decision to be a Salesian and his tasks as Rector Major. He also addressed the issue of migrants all over the world: "I tell you with pain, it hurts me to see that Europe is not able to give a more courageous response to tackle the problem of migration ..."

Interviewed also by "Radio Sandi", he declared: "We are united to the Salesians of the whole world by our passion for the young ... It is enough that they are young that we love them and, regardless of their faith, we welcome them in Salesian houses."

Finally, in the evening, he had a spiritual meeting with young people during which he affirmed: "Commitment and life pass through a personal and profound experience of God. It is what I invite you to."