Italy - Youth and Salesians: Fr Á.F. Artime encourages everyone to look to the future with trust and hope 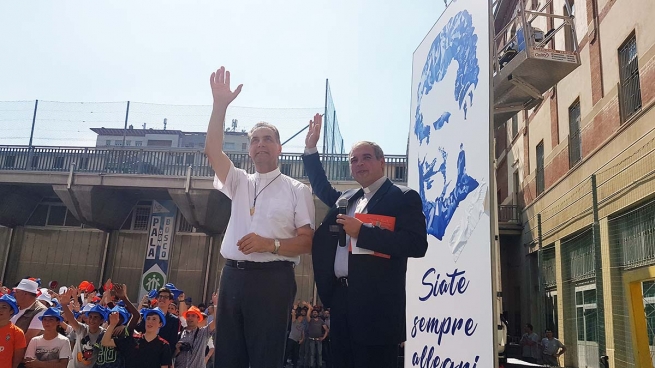 (ANS - Novara) - The Provincial visit of the Rector Major, Fr Ángel Fernández Artime, to the Salesian District of Piedmont and Valle d'Aosta (ICP) began on Friday 18 May. After the meeting with the Provincial Council, in the morning, the tour in the land of Don Bosco began: the first stop was the Salesian Institute "San Lorenzo" of Novara, celebrating its 125th anniversary.

"I am a Salesian like any other, simply more fortunate because I am called to bring the greeting of Don Bosco to the world," said the 10th Successor of Don Bosco to the students of the institute. "I meet many young people in many countries, and I often ask myself how they are different from each other and in the end the answer is always the same: they can have different skin color, a different language, but in the end, in their heart lives the same desire for happiness, that desire for happiness to which Don Bosco tried to give an answer."

The Rector Major continued with a testimony on his vocation followed by a theatrical performance at the end of which the young people of San Lorenzo addressed the Rector Major with other questions regarding the Synod on Youth, which sees them as the prime protagonists for a renewed Church.

On the occasion, a girl also asked him how to overcome moments of darkness. "Do not be afraid. Find someone who believes in you," replied Fr Á.F. Artime. "We Salesians believe in you young people, in your values, in your strength, in your courage. Have dreams, mighty dreams and beautiful dreams, dreams no one will ever be able to steal from you!"

The next day, in Turin, the Rector Major began with the meeting with his confreres. "The first thing I want to say to you is we have a beautiful Congregation. Pope Francis, I can assure you, has great respect and love for us ... I can assure you that the Congregation is experiencing a moment of profound maturity ... Within the Church, the Salesians are those who have suffered the least from the vocational crisis. If we take seriously the importance of discernment, the spiritual accompaniment of young people and of confreres, we shall soon reach a point of equilibrium. The Lord speaks to us clearly. And He invites us to never allow pessimism to prevail, but to contribute with passion and hope."

The photos are avialable at: https://drive.google.com/open?id=1pGnJBoIMp-55fCgS2MW17lu2uCl1wYYn