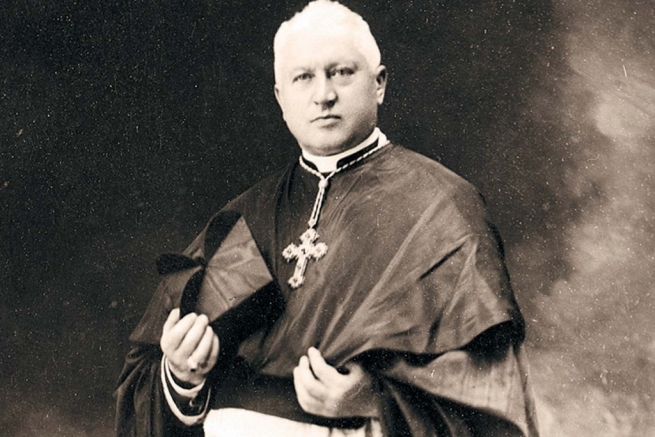 (ANS - Vatican City) - On May 19, Pope Francis, receiving in audience Cardinal Angelo Amato, SDB, Prefect of the Congregation for the Causes of Saints, authorized the same Congregation to promulgate, together with others, the Decree concerning the heroic virtues of the Servant of God Augustus Joseph Hlond, of the Salesian Society of St. John Bosco, born 5 July, 1881, in Brzęczkowice (Poland) and died in Warsaw (Poland) on October 22, 1948.

Second of 11 children, his father was a railway worker. Having received a simple but strong faith from his parents, he becomes a Salesian. Ordained priest in 1905, he took care of the young, especially the poor, with the charism of Don Bosco. He lives among the people, shares the joys and sufferings of the simplest persons. But he is also noticed by Pope Pius XI who entrusts him with the mission of providing for the religious arrangement of the Polish Silesia: from his mediation between the Germans and the Poles the diocese of Katowice was born in 1925, of which he became bishop. In 1926 he was archbishop of Gniezno and Poznań and primate of Poland. The following year the Pope promoted him cardinal. In 1932 he founded the Society of Christ for Polish emigrants, aimed at assisting the many compatriots who left the country.

In March 1939, he participates in the Conclave that elects Pius XII. On 1 September of the same year the Nazis invade Poland: the Second World War begins. The cardinal raises his voice against the violations of human rights and religious freedom made by Hitler. Forced into exile, he takes refuge in France, denouncing the persecution against Jews in Poland. The Gestapo arrests him and has him interned first in Lorraine and then in Westphalia. Released in 1945 by the Allies, he returns to his homeland, where he, however, finds communism. He courageously defends the Poles from oppressive Marxist regime, and is even subject to several attacks from he escapes unscathed. He died on 22 October, 1948, of pneumonia, at the age of 67.

Cardinal Hlond was a virtuous man, a shining example of a Salesian religious and a generous, austere pastor capable of prophetic visions. Obedient to the Church and firm in the exercise of authority, he demonstrated humility and constancy in moments of greater trials. He cultivated poverty and practiced justice for the poor and the needy. The two columns of his spiritual life, at the school of St. John Bosco, were the Eucharist and Mary Help of Christians.