Guatemala - "Zatti Clinic": a service close to the people 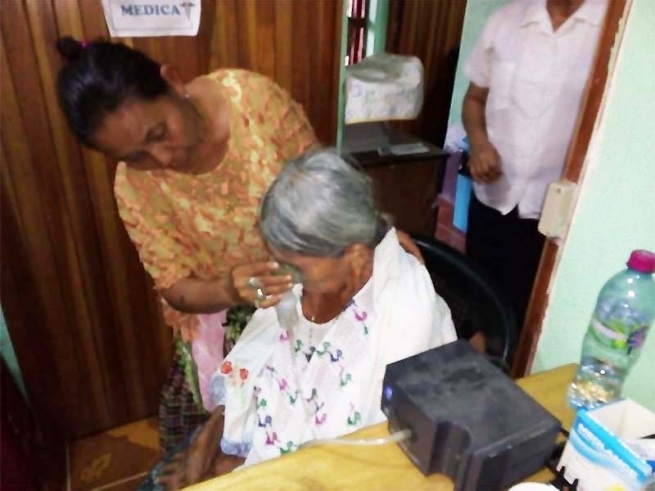 (ANS - San Benito Petèn) - The Salesian medical dispensary of San Benito Petén, dedicated to the blessed Artemide Zatti, is a place of hope for many people. In fact, in the Petèn region there is only one hospital, which with two health centers, is meant to provide for the health of a population of almost one million inhabitants. "A situation that clearly makes people prefer to die at home rather than seek treatment at the hospital," says Fr Giampiero de Nardi, Salesian missionary.

To make matters worse, there is little preparation for doctors and sometimes a lack of willingness to help. "The last case was a lady who came to our clinic to treat a leg infection caused by an accident. The woman suffered from diabetes, so the leg was seriously infected. The hospital doctor told her he would have to amputate her leg. The woman came to us, she was medicated every day and now she walks perfectly," the missionary tells us bitterly.

Thus, the number of patients going to the "Zatti Clinic" to be treated is starting to be considerable. Central is also the humanity with which they deal with patients. "On the one hand it makes me happy, but on the other it makes me angry," continues Fr de Nardi. "It is not possible that our battered clinic can compete with a structure as big as that of the hospital."

In a country where more than half the population lives on less than a dollar a day, health is not a recognized right. There are very few public facilities where they can be treated and the first causes of death among children are intestinal and respiratory infections. A simple antibiotic, combined with adequate hygienic conditions, could save their lives.

Given the Salesian commitment to the health of the local people, several schools in the city are contacting the Salesian mission personnel to give training courses to children and parents on the topic.

In the meantime, work to expand and improve the structure also continues. "Thanks to the help of Missioni Don Bosco and a benefactor, we have equipped ourselves with a new dental chair and instruments for electrocardiograms, mouth radiographs and urinalysis."

And in the meantime a new room has been created to perform the clinical examinations and in which to place the new dental chair.