Italy - Basilica of Mary Help of Christians: "the open and welcoming home of an outreaching family" 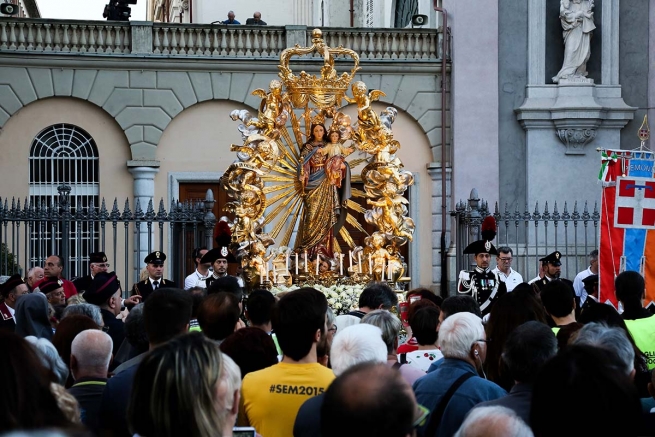 (ANS - Turin) - A huge crowd marked the celebrations held yesterday, May 24, in Turin, in honor of Mary Help of Christians. "In our hearts today we have a feeling of profound love for the Mother," said the Rector Major, Fr Ángel Fernández Artime, in the homily of the Mass presided at Valdocco.

Throughout the day numerous celebrations took place in the Salesian temple. At 11 o'clock Mass was presided by Msgr. Cesare Nosiglia, archbishop of Turin, who, speaking of the Synod on Youth, spoke of the difficulties many young people encounter in the world and he invited everyone to "listen to them and take seriously their problems and their observations ... Young people are capable of gestures and commitments of great generosity and vigor, spiritual and social."

With the entrustment to Mary Help of Christians and the invitation to pray to request intercession, the gaze then turned to the weakest of subjects among citizens: families in difficulty, immigrants and refugees, poor people ... Following the example of Don Bosco and the numerous Turin "social saints", Msgr. Nosiglia urged Christians to "inhabit" the existential and geographical peripheries and to strengthen the alliance between "inner values, both civil and spiritual, to give a soul not only to individuals, but to all of society."

In the afternoon, Fr Á.F. Artime presided at the Eucharist inside the Basilica of Mary Help of Christians. For those who share the Salesian charism, he explained, "the devotion to Mary Help of Christians is the experience of the active and operative presence of Mary, which occurs in hearts and in works: a personal relationship with 'She who did everything'."

Then, intervening on the value of the basilica of Valdocco for the entire Salesian world, the Rector Major observed: "Mary herself wanted this church to be her home. Not a simple house, where you live ... But a 'mother' house, from which to receive life and the drive to go beyond, beyond borders, seas and mountains, beyond imagination: it is the open and welcoming home of a family that reaches out."

In the evening, the traditional procession of the statue of Mary Help of Christians resounded with the hymns of praise and songs of thanksgiving of the whole city of Turin towards "Our Lady of Don Bosco".

Available on ANSFlickr, the photos of the day; on the ANS Facebook page, live videos.