Croatia - Rector Major: "Whatever your dreams may be, you will achieve them only by living a friendship with God" 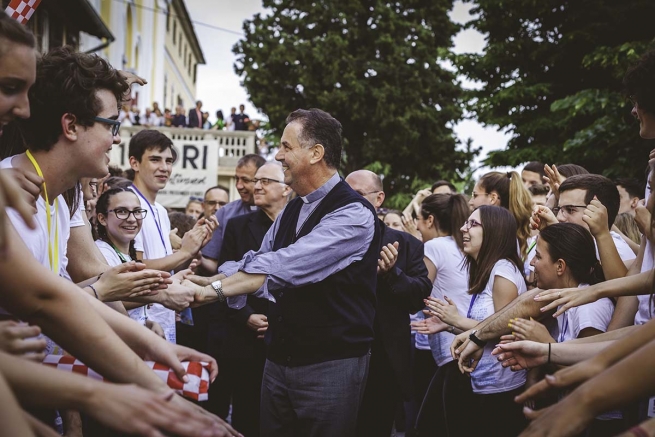 (ANS - Rijeka) - The Animation Visit of the Rector Major, Fr Ángel Fernández Artime, to the "Saint John Bosco" Province of Croatia, on the occasion of the 100 years of the Salesian presence, began with a surprise full of enthusiasm and joy.

While Fr Á.F. Artime was on the terrace of the Salesian parish of Rijeka, suddenly 350 young people from the Salesian centers of Rijeka and Zagreb rushed from the back of the oratory and greeted the 10th Successor of Don Bosco with a festive welcome song.

After the initial emotional moment, the Provincial Delegate for Youth Ministry, Fr. Danijel Vidovic, introduced several theatrical scenes by which the history of the Salesians of Fiume and the growth of the Salesian Family in Croatia was presented to the Rector Major.

Salesians came to Rijeka in 1918. Local Church was inviting Salesians for more then 20 years before they came. In short time after the arrival Salesian oratory became one of the most important places in the city. First Salesians in Rijeka were Italians and house belonged to Veneto province until the end of Second World War. During the communist dictature, Slovenian and Croatian Salesians were living hard times. Still, they managed to open the school for boys who aspirated to became priests, but the school was not allowed to have public right. With independence of Croatia in 1990. better times came and Salesians did get public right for gymnasium in 1993. In 25 year old history school is one of the best in the city. The newly built wing of the school will now allow it to have more then 300 students

The Rector Major then spoke with the children: of the presence of the Salesians in 134 countries and of the many activities in which they are engaged in with and for the young poor. And, on being asked a motto to leave the young, he quoted St. John Paul II and said: "Do not be afraid!"

The day continued with an academy in the new structure of the Salesian institute; present: the city archbishop, mgr. Ivan Devčić, the Mayor, Zlatko Komadina, the Provincial, Fr Pejo Orkić, the Rector of the center, Fr. Dragutin Detić, the Rector of the school, Fr Niko Tunjić, and the past pupils, teachers and founder of the Croatian Catholic Scouts, Marin Miletic.

At the end of the day the young people animated a prayer vigil and Fr Á.F. Artime left them with a thought to ponder upon in  ​​the traditional Salesian "Goodnight" wherein he invited them to seek their own vocation: "Whatever your dreams may be, you will be able to achieve them only by living a friendship with God."

The second day, Saturday 26 May, began with the meeting with the Daughters of Mary Help of Christians and continued with a meeting with the local Salesian Family. Main event of Rector Major's visit to Rijeka was the Holy mass. With SDB's from Croatia there were also Salesians from Slovenian province and Italian North East province as once community in Rijeka belonged to those provinces. Rector Major remembered in homily all of those who contributed in last 100 years of Salesian presence in Rijeka, and recalled also: "We, the Salesian Family, must always keep the door open for others. It is not time to be afraid of others!" After the homily, he also welcomed the vows of 5 new Salesian Cooperators.

Finally, there was still time for the Provincial's moving words of thanks, the delivery of several gifts to Fr Á.F. Artime and a Soccer tournament between the oratorians.