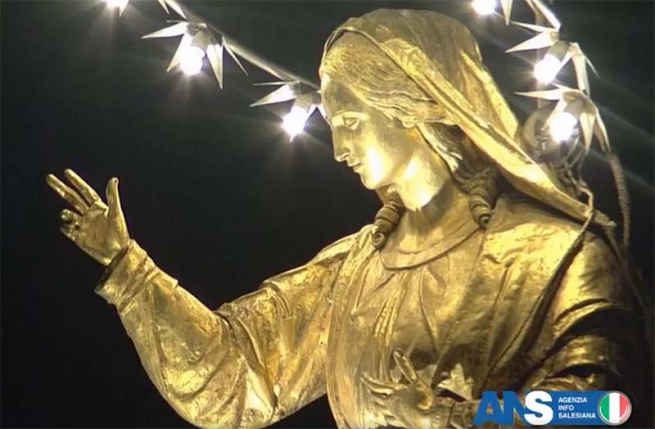 (ANS - Turin) – The feast of Mary Help of Christians recently celebrated in Turin was broadcast live for the first time, with a commentary in Spanish, too. A total of over 140 thousand people were reached through Facebook.

The social networks allowed the Turin celebrations of the feast of Mary Help of Christians to reach beyond the borders of Italy and to project themselves onto every continent. Viewers who accessed information regarding the procession of Mary Help of Christians, the Masses and events held between May 23 and 24 in Turin numbered 147,000 circa; the number of people who watched the events live was over 88,200.

The feast of Mary Help of Christians has always aroused interest in Turin and throughout the Salesian world. This year it was seen for the first time on all continents: the broadcast was also watched live in Togo, Peru, Syria, Japan ...

The novelty this year was to add the Spanish language simultaneously to the Italian-language broadcast via a specific channel on Facebook. The religious of the Daughters of Mary Help of Christians, Sr. Luigina Silvestrin, and the Salesian past pupil Ángel Gudiña curated the Spanish version.

The main events broadcast were:

-                    The presentation of the book "The city of Don Bosco", promoted by the Rector    Major, Fr Ángel Fernández Artime, and edited by Fr Bruno Ferrero and the Dicastery for Social Communication;

The technical support for the broadcast was carried out by a joint team of young people from the Southern Italy Province (IME) and professionals from the Special Circumscription of Piedmont and Valle d'Aosta (ICP). The signal was provided by "Missioni Don Bosco."

Thanks to the good collaboration achieved in the joint work between the Dicastery for Social Communication and the two Italian Provinces, who made the technical and professional resources for this event available and possible, a live broadcast of the main celebrations of the festival in English is already in the works.