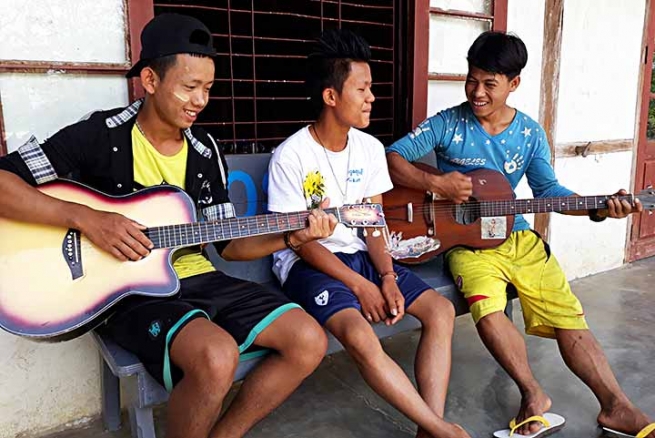 (ANS – Myitkyina) – The small and dynamic community of Myitkyina – which animates the Project chosen for the Salesian Mission Day 2018 – is happy to share news of its trainees' progress with the worldwide Salesian Family. Already 500+ young men and women (18-25 years of age) have graduated during the past 11 years from the Don Bosco Vocational Training Center. Fr. Victor Nawki, SDB, and two Salesian Brothers – Ambrose and Dominic – are involved in providing full-time 24/7 joyful assistance to the newcomers. And all three Salesians are happy to soon welcome and be joined by one more priest to make this community more numerous.

“Another batch of new students for the 2018-2019 school year, who commence on June 5, is already with us for the orientation, while the second-year trainees are still attending their OJT (On-Job-Training), most of them still from Don Bosco VTC boarding house. The majority of the newly enrolled Bosconians are Kachin people, but there are also some Nagas, Chinh, Kaya, Shan and other ethnic group trainees,” Fr Nawki explains.

Like every year, the majority of the students are Catholics, with only a few of other Christian denomination and one Buddhist. But they experience again and again the same feeling of Don Bosco with Bartolomeo Garelli in Turin (1841). Fr Nawki says: “During the first Eucharist we again realized that many of our newcomers don’t even know how to make the sign of the Cross, what their baptismal name is, or if they had ever been accepted for their first Holy Communion. Like every year, a patient journey during this orientation period has started. The first three weeks are dedicated to ‘prayer school’ where by osmosis our new students learn how to pray the Rosary, how to participate in the Eucharist, how to say the daily prayers in Kachin, Burmese or English.”

For the rest of the time, there are daily chores on the large farm (preparing for the rainy season), afternoon sports (kickball, football and volleyball) with prayer lesson and orientation sessions.

During last school year, 2017-2018, the VTC facilities witnessed a number of improvements: two new open-air workshops were built, 10 laptops were purchased for the new IT section, and due to the large number of students, some corridors were transformed into study halls or bedrooms…

Believing in worldwide Salesian solidarity, the Myitkyina Don Bosco community continues to dream about a new community building and a new study hall for the second-year (OJT) students, a much-needed water reservoir, repair of the roofing and new equipment in all six sections of the VTC (carpentry, electricity, automotive, welding, cell phone repair, tailoring and beautician).