Croatia – Rector Major: "May the communion with God be at the center of your lives" 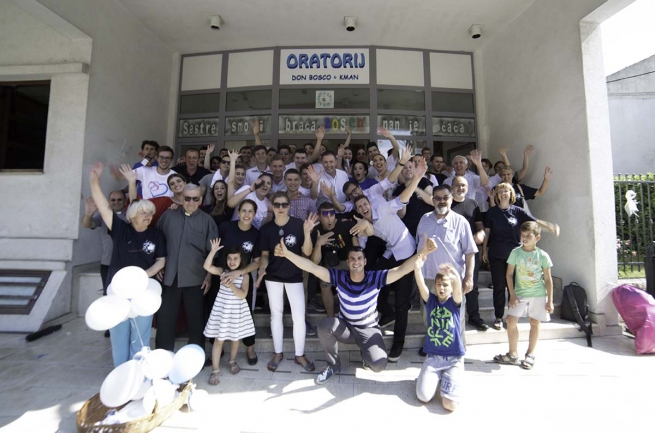 (ANS – Split) – A new warm welcome to Rector Major Fr Ángel Fernández Artime took place in Split, where Salesians are celebrating 50th anniversary since they  came to the city.

Young people and children of the oratory took to the parish street where they stood waiting for the 10th Successor of Don Bosco. With his arrival they started to jump, sing and wave flags. The Rector Major joined them and walked with them to the parish church. Fr Mirko Barbarić, director of the Salesian community in Split, expressed a warm welcome to the Rector Major and the Salesians accompanying him, Fr Tadeusz Rozmus, Councillor Regional for Central and North Europe, Fr Horacio Lopez, Secretary of the Rector Major, Fr Pejo Orkić, Provincial of the Croatian Salesian Province, and others.

In 1968, Salesians came to Split on the invitation of bishop Frane Franić. It was not the very first time Salesians had come to Split; they had led the Institute “Martinis Marchi” from 1936, but with the arrival of the Communists to power after Second World War, the work of the Salesians was banned in 1947 and they left the city. 19 years later they came back as they accepted the work in a newly founded parish of Mary Help of Christians. They could only do basic pastoral work but they managed to build a church. Since 1990, there have been much better times and the Salesians opened their arms in welcome, free to work with youth. In 1997, they built the “John Paul II” Youth Center next to the church. Today, they have strong groups of Salesian Cooperators and young animators, and their most well-known or popular project is the Summer oratory when they gather hundreds of children from the parish and other parts of Split.

The Welcome party proceeded with dance and the Rector Major was very happy when he met Fr Nikola Zubović, the oldest Salesian in Croatia, as he was dancing with young people. The Rector Major took the microphone and said to everyone, indicating Fr Nikola, “This is the Salesian! 91 years old and still with young people on the playground. He understands very well what it means to be Salesian!” An interesting fact is that Fr Nikola was born exactly on the same day as Pope Emeritus, Benedict XVI. The gathered youth had a few questions for the Rector Major. They wanted to know how he became Salesian and what his typical day was like. The evening closed with prayer and the traditional good night talk.

The highlight of the Split visit was Holy Mass that was broadcast on Croatian national television. In his homily, the Rector Major said: “We deeply believe that the Holy Spirit raised Saint John Bosco and chose him as the Father and Teacher of young people of the entire world. We also believe that the Holy Spirit raised him so that Don Bosco can lead us to Jesus. One thing that is very much of the Gospel and Salesian is that love treats and heals. It is very Salesian also to believe that education is a matter of the heart.”

At the end of his homily, the Rector Major praised God for the presence of Salesians in Croatia and for the vocations that Salesians in this country have. He added: “I want to thank all of you on your will to walk together with young people and serve them. I want to kindly ask that we let that unity with God be in the hearts of everyone of us. If our heart is in peace and love that means that God is with us.”

The community in Split also made nice gestures for the community in Aleppo as people from the Salesian parish in Split collected contributions for them. The Rector Major said: “More than this gift, important is the thing that we think of each other.”

Later, at the family table, was the Archbishop of Split, mons. Marin Barišić, who came to greet the Rector Major and the visiting Salesians.