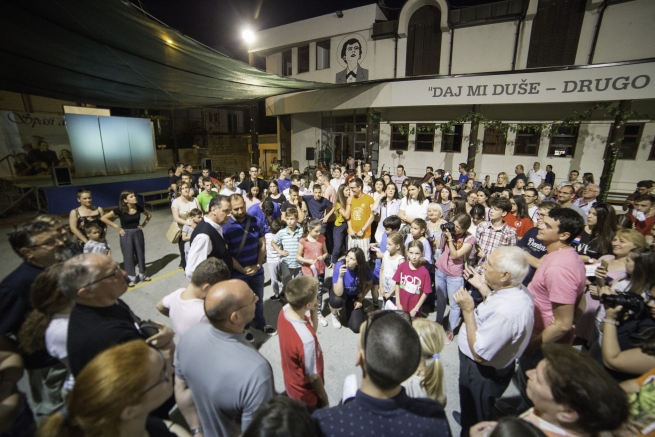 (ANS – Zagreb) – Rector Major Fr Ángel Fernández Artime came to Zagreb, Croatian capital city, to provincial house, on Sunday evening and he was greeted by young people, young families and Salesians. He prayed with them rosary and gave them a good night talk. “I was said that I will pray with small group and I see that now here we have a national assembly,” said Rector Major after more then 150 young people came to pray and listen him.

In December of 2017 Rector Major named new provincial of “Saint John Bosco” province of Croatia in person of Fr Tihomir Šutalo. On Monday morning Rector Major together with Fr Tadeusz Rozmus, Councillor Regional for Central and North Europe, meet with Provincial council. After the meeting they celebrated the Holy mass in chapel of Saint John Bosco within the church of Mary Help of Christians. During the Holy mass take over of the service of provincial was held.

Fr Pejo Orkić, who was serving as the provincial from 2012 to 2018, in his address thanked God and the Rector Major thanked Fr Pejo Orkić on his service. Salesians of Croatia gave to Rector Major a gift, statue of blessed cardinal Alois Stepinac, who was great contributor to Salesians in Zagreb.

“None of us has that ability to present himself as the leader of the others, beginning with Rector Major. But there is one very precious thing. Building of our provinces goes with someone starting and someone finishing with their service” said Rector Major in homily.

Fr Ángel Fernández Artime Rector Major pointed out: “Everyone of us has responsibility and authority of service. This is the moment when everyone of us can say 'my authority is serving. And I serve by Jesus heart.' We can see that province is going with serenity, with some difficulties also, but with lot of blessings given by God, and with big hope. (…) We have to move on with our walk in faith. Walk where we give ourselves to our provinces and to young people. When heart is fair serving is always good.”

Rector Major also mentioned new provincial, Fr Tihomir Šutalo: “I wish him that he always have the picture of Good Shepherd on his mind. On his first place must be his confreres, with all the good and bad things they have”.

“Wealth of our provinces are not buildings. The true wealth of provinces are we, Salesians, with our good things and our weaknesses. I am convinced that Church in Croatia needs Salesians. Society needs us. Young people of today and tomorrow need us very much. That is the way that this change of service will be good for the serving,” Rector Major said concluding his homily.

New provincial of “Saint John Bosco” Province of Croatia, Fr Šutalo said in his address: “My wish for next mandatory is that we refresh our identity. Task of everyone of us is to build our spiritual life. On the level of our life as brothers I wish that we live unity and love following example of the Holy Trinity. Our Salesian mission is to work and live for young people because that is the wish of the Holy Trinity.”

“We have to take special care about our older and our younger brothers. And we have to give ourselves more for the young people, especially accompanying them,” Fr Šutalo added.

“I thank to Father, Son, and the Holy Spirit for the mission that is given to us. I want to thank to Rector Major for his presence and given trust. I thank to my brothers Salesians who accepted their service in new provincial council i their readiness that we lead and animate our province. Special thanks to don Pejo as he was the witness of unity and love for every brother, and with every brother, during his term. Not only that I call you to pray, but it is our obligation that we pray for each other,” Fr Šutalo finished his address.

At the family table after the Holy mass Salesians were joined by Mr. Milan Bandić, Mayor of Zagreb, who came to congratulate to Salesians with big cake.

In the afternoon Rector Major spent time with Salesians in the provincial house. Later afternoon he had visit to Salesian community for formation and vocation where he talked with young man who felt in heart that they want to follow Salesian charisma of Saint John Bosco.

After the dinner Rector Major went to Holy Mother of Liberty sanctuary that is lead by the Salesians. He was welcomed by more then 300 children, young people, young families and adults who wanted to pray with him hearing how beautiful was during his visit in Rijeka and Split. After the Rosary and Good Night Talk, it took long time before Rector Major could go for a sleep as majority of the gathered people wanted hug and to take photo with him.

Rector Major Fr Ángel Fernández Artime left Croatia for Rome with his Secretary, Fr Horacio López, on Tuesday morning escorted by Croatian Salesians who thanked him once again for his presence among young people and Salesian Family in Croatia.