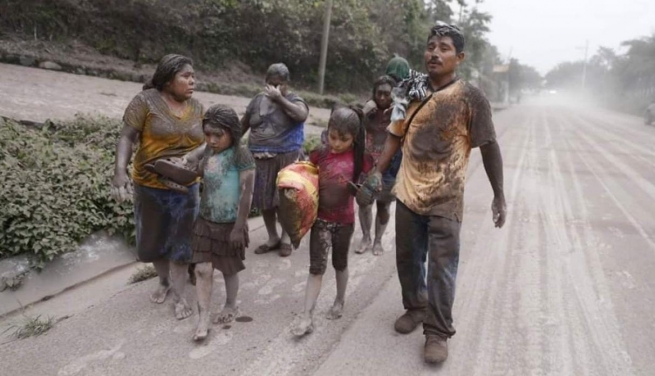 (ANS - Escuintla) - On Sunday 3 June, around 3 pm local time, the Fuego volcano erupted with ash columns to 6 thousand meters high. So far 69 victims have been counted, in a catastrophe that affects the whole southern part of the country. Three whole villages have disappeared under tons of ash.

The ashes fell on at least five departments of Guatemala: Escuintla, Chimaltenango, Quiché, Sacatepéquez and Guatemala. The alarm system was immediately activated and the rescue corps intervened to evacuate the population affected by the natural disaster and to save the injured. However, the lava of the volcano joined a stream of mud generated by heavy rains falling in those areas, with the result of increasing the speed of the lava's movement, preventing local people from escaping.

The Guatemalan army, firefighter volunteers, members of the National Congregation for Disaster Reduction (Conred) and relief groups worked late into the night between Sunday and Monday, but due to the high temperatures and poor visibility they had to suspend operations to resume it in the early hours of the following day.

Sixty-nine victims have been counted so far, including entire families. The village of San Miguel los Lotes, on the slopes of the volcano, was completely covered by volcanic materials. Rescuers have found a number of bodies, but there are fears that there are others hidden in the rubble.

The latest available data show 1.7 million people involved, 3,265 people evicted, 1,687 accepted in the shelters and dozens injured. Bishop Víctor Hugo Palma, bishop of Escuintla, made himself present among the people to give spiritual support and help.

In Guatemala City, the capital, a rain of ashes fell at the time of the eruption and the authorities have advised not to go out in the streets and to be very careful if driving.

The Salesian parish "Espíritu Santo" is sending out information on how to help and the locations of the aid collection centers, one being the Salesian "Mesoamerican University." Clothes, non-perishable foods and water are collected to be delivered to the Caritas of Guatemala, responsible for distributing to the needy.

The Salesians in Guatemala animate seven centers and all have been put at the service of the population affected by the eruption.