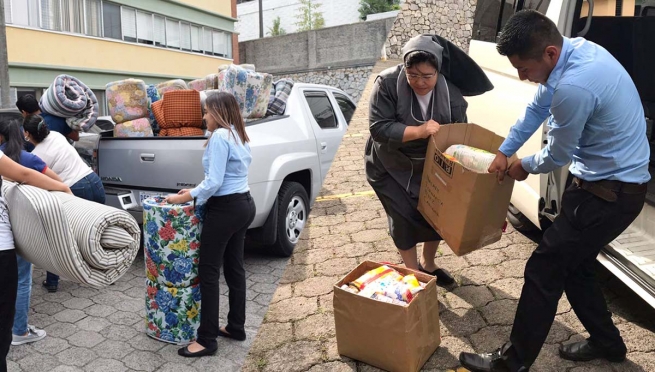 (ANS - Escuintla) - At 3:00 pm local time on Sunday 3 June, the Fuego volcano began to erupt, launching columns of ash rising above six thousand meters. The catastrophe has devastated the south of the country, several villages have disappeared under tons of lava and ashes, and dozens of people have died. So far, the eruption of the volcano has caused 99 victims, almost 200 missing and about 3,000 people wounded and displaced, in one of the greatest tragedies of recent years in Guatemala, a country that has 38 volcanoes.

Once the roars of the volcano had calmed down, after the lava ceased sliding over the area and the gases started to dissolve, people started to go out in search of their relatives. On the way they found what looked like a horror movie. Now, their experiences.

"Olga González, 46, lies on the floor of the Escuintla shelter, and remembers her escape. 'Under there is my father and my niece. The girl had gone to her grandfather and did not come back. If we had waited for her, we would all be dead, so we started running," she says, pointing to her burned feet. 'She had no time for anything, the lava river was coming over us and we had to run. We could only run and cry without looking back,' recalls, next to her, Domingo López, 79, with feet full of sores and wounds, who had locked himself up in his house and stayed there until the water vapor made it unbearable and someone recovered and pulled him out through a window. God has in glory all those who are left behind," wrote J. García of Escuintla.

"The Holy Father, deeply saddened to learn of the sad news of the violent eruption of the Fuego volcano, which caused numerous victims and enormous material damage that have hit a significant number of inhabitants of the area, offers suffrages for the eternal rest of the dead and the prayers for all those who suffer the consequences of that natural catastrophe," wrote the Holy See in a telegram.

A few days ago, the Salesian parish "Espiritu Santo" began a campaign for aid, while the Mesoamerican University has become a collection center, where non-perishable food and especially water are received and collected for distribution.

Also adhering to this worldwide request for help and solidarity is the "Damas Salesianas". "There are many people who are helping in the search and rescue work and the conditions in which they are working are very dangerous ... We want to appeal to your good heart and love for God to help these people," they wrote on their Facebook page.