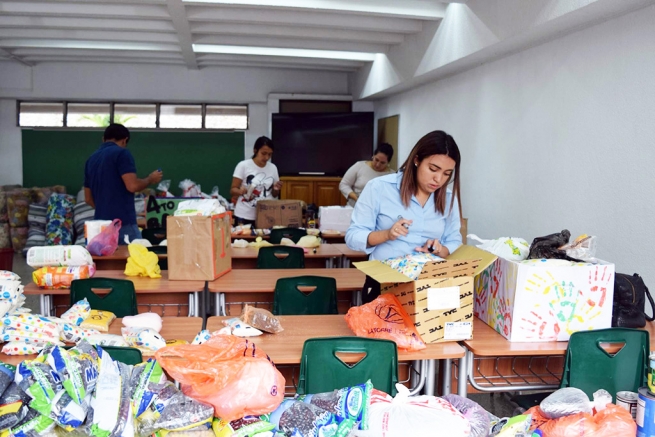 (ANS - Escuintla) - After the tragic eruption of the Fuego volcano on 3 June, the entire Guatemalan population has mobilized to help the survivors, recover the bodies of the victims and support the relief effort.

Before a tragedy that according to the latest official data has caused 99 victims and forced 3,319 people into the reception centers, the widespread participation of citizens, of different groups of the population and of neighboring countries has been surprising. That said, it is difficult to determine the exact number of reception centers and shelters activated so far, since there are many institutions, companies and associations that have opened their doors to collect aid and bring them to people housed in the shelters.

The actions of the Catholic Church in dealing with this catastrophe have been of various kinds. Mgr. Víctor Hugo Palma, for example, was at the scene of the tragedy at Monday sunrise to bless and accompany all the rescuers, to give the last sacraments to the victims ... The Episcopal Conference also issued a statement of solidarity and call to action. The material support that is provided to all the affected areas is varied, with humanitarian aid centralized by the Caritas of Guatemala which, in coordination with the Caritas of Escuintla, is distributing all the goods being received. In addition, several accounts have been opened for supporters wishing to make donations.

Various religious bodies, such as the Daughters of Charity of St. Vincent de Paul, have been preparing food for rescuers and taking food to the areas struck by this tragedy. Likewise, the members of "Eventos Católicos" yesterday, June 7, headed to Alotenango, one of the villages most affected by the eruption, and to nearby areas, to provide medical assistance.

In the diocese of Escuintla, collections during all the Masses of Sunday, 10 June, shall be destined to the rescue efforts.

Most churches have started collection centers and some parish halls have become shelters. In the case of Salesian houses, the parish "San Juan Bosco", through the group "Duc in Altum", has started a fundraising campaign. The Youth Ministry students collect medicines and various items and manage the collection center opened in the youth center. In the Mesoamerican University, a Salesian structure, the University ministry has taken responsibility for the collection, organization and despatch of all the contributions received.