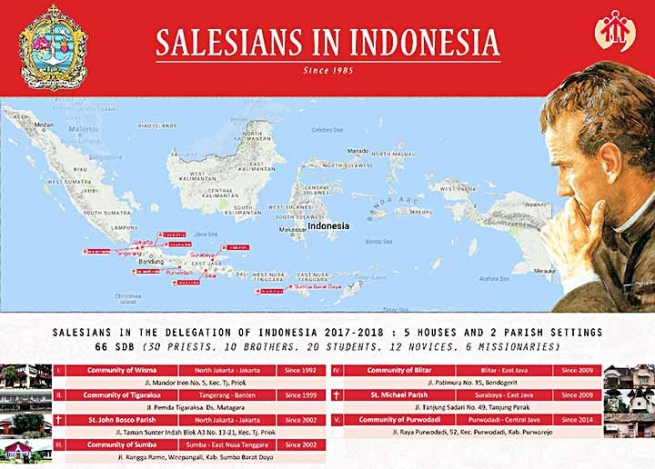 Salesian presence in Indonesia started in 1985 (under then united Philippines province, FIL) and the Delegation of Indonesia was canonically established in 2010. Over the years the service of the Delegate-Superior was entrusted to Fr. Yohanes Boedi Soerjonoto (2011-2013), Fr. Andre Delimarta (2014-2015) and finally to Fr. Lino Belo (2015-2018).

The need for the growth from the Delegation towards the Vice-province was already discussed and grew mature at various occasions. Already the first Delegation Assembly of Indonesia in 2012 produced a Road Map (2012-2018) with a clear goal to prepare the necessary animation environment and structures during past 6 years. Indeed, that dream was accomplished just today!

According the Report of the 2018 Extraordinary visitation (February – March 2018) there are 7 Salesian communities (5 canonical and two non canonical) with 61 SDB (30 Priests, 10 Salesian Brothers and 20 Salesians – candidates to the priesthood) with 12 novices and 8 prenovices this year. Another 6 Salesians of Indonesia are missionaries ad gentes in Europe, Latin America and East Asia. At present only five of the confreres working in Indonesia are coming from other countries – two from Timor Leste and three from the Philippines. Fr Andrew Wong was recently assigned to the INA by the Rector Major upon his missionary request ad gentes.

Recent Consultation’ to the ITM confreres for the establishment of the new Vice-province INA brought rich reflection for the leadership of Indonesia. Not only about the strong and weak point of the Salesian charism in Indonesia, but also about many items that might be included in the mutual agreement between Indonesia and Timor Leste Viceprovinces in the future.