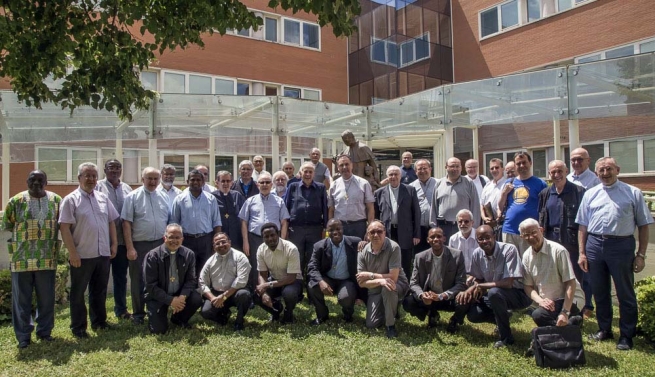 (ANS - Rome) - On 8-10 June, the Team Visit, the last in the calendar of the Fr Ángel Fernández Artime, the Rector Major, and his Council, took place at the "Maria Sede della Sapienza" Vice Province. An important visit, which involved 40 Salesians working in the cultural and pastoral mission of the Salesian Pontifical University (UPS).

The presence of the Rector Major and members of the General Council highlighted the esteem and consideration of the whole Congregation for this formative service, in favor of many confreres, priests, religious and youth from all backgrounds.

The visit was marked by meetings as an assembly and for group work. There were two poles of reflection: "the identity of Salesian consecrated life in the Vice Province and in the University", to verify the journey of assimilation of the General Chapter 27; and "the specific mission of the UPS within and at the service of the Salesian mission", to improve and better clarify educational and formative skills professionally.

After the presentation of these themes, there were reflections in what was a climate of listening, participation and authentic responsibility. A much-felt involvement shared by all with the desire to walk in truth. This was precisely the invitation of the Rector Major: to always walk in truth and for truth. An invitation addressed to all those present, but also to all the Salesians of the Vice Province who in some moments gathered around the Successor of Don Bosco: in the "good night" of Friday evening and in the two Eucharistic celebrations animated and experienced with special care and depth.

It was significant that the older Salesians of the infirmary also attended these celebrations, accompanied by the Sisters of the Sacred Hearts of Jesus and Mary. For them, a sign of unity and fidelity, the Rector Major had words of paternity, esteem and appreciation.

The Vice Province - UPS community expressed its gratitude for the animation and the government of the Rector Major, for his attentive presence, support and paternity in accompanying it in its carrying out its university mission in favor of the Congregation, of the Church and of society.

The Team Visit is an encounter that confirms the unity of the Congregation, which reinvigorates its steps forward and gives the typically Salesian optimism and enthusiasm "to continue the journey together, in team work that looks to the future with foresight and joy," said Fr. Á.F. Artime summing up.