Venezuela - After desecration of tombs, deceased Salesians may now rest in peace 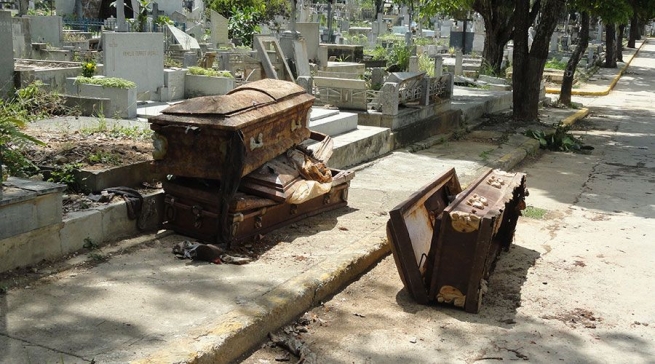 (ANS - Caracas) - A few days ago, at 107 years of age, Fr Giuseppe (José) Berno, the oldest Salesian of the Congregation, died. No one would have thought that after having joyfully dedicated his long life to God and to the most needy, he would not be able to rest in peace at the cemetery, and that it would become necessary to proceed to his cremation.

In the socio-economic context that Venezuela is experiencing, the testimony of this Salesian missionary should not be forgotten. Many have wondered these days: what was the secret of his long life? It was enough to see him: always smiling, optimistic, cheerful. "Only God and Mary Help of Christians know the life of Father Berno, the difficulties and the sacrifice of a missionary ... His life is a testimony of fidelity, of giving, of suffering, but of immense happiness," wrote one of his past pupils.

Yet the same Venezuelan socio-economic crisis has now reached even the cemeteries: not even the dead rest in peace!

In recent months the pantheon of Salesians in the General Cemetery has been desecrated twice. The graves of the Salesians have been opened and looted.

"Given the situation and the lack of response from the cemetery authorities in ensuring the safety of the remains, the bodies of the deceased Salesians were exhumed. Thus, thanks to the collaboration of the Valles family, the mortal remains of the Salesians were transferred to a burial chamber, where a Eucharist of reparation was celebrated. Subsequently, all the bodies were cremated and deposited in small urns," reported the Salesians of Venezuela.

"41, the number of Salesian tombs desecrated," said Fr Timothy Ploch, Regional Councilor for Interamerica. "The reason is unknown, whether it's simple theft or for religious reasons; the truth is that the authorities have been asked to take care of the cemeteries, but there have been no answers. So all the bones were collected, the identification of each Salesian was made and finally they were cremated. And in a solemn religious ceremony they were deposed in the Don Bosco parish."

The funeral of Fr Berno, presided in the parish of Don Bosco Altamira by Msgr. Raúl Biord, bishop of La Guaira, offered the opportunity for translation. The remains of Fr Berno were cremated together with those of the 41 Salesians whose tombs were desecrated and the funeral urns were placed at the main entrance of the temple, at the foot of the Virgin Mary Help of Christians.

Now, finally, they can rest in peace!