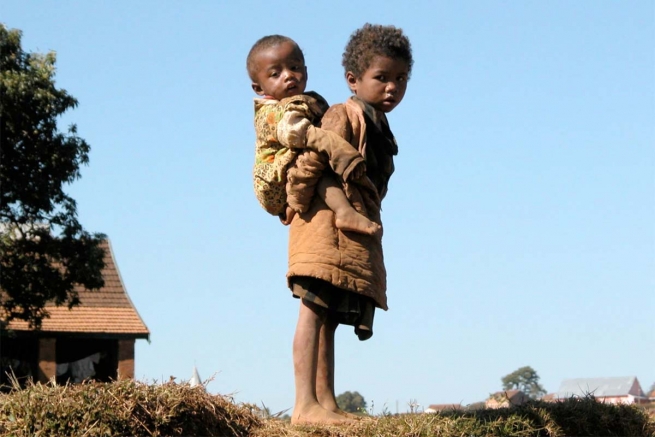 (ANS - San José de Evinayong) - It was 16 June 1976 when in Soweto, South Africa, clashes developed between the black students and the segregationist police due to the imposition of Afrikaans, the language of the white minority, even in the schools in which the black majority of the population was segregated. Among the many victims were several young demonstrators who also died in the clashes; in their name the "International Day of the African Child" was born, a day celebrated every year to draw attention to the living conditions and rights of children and young people on the African continent.

Today the apartheid regime that separated whites and blacks in South Africa no longer exists, buried by the evidence of its absurdity. But throughout the African Continent there are still many problems that compromise the natural development of African children, first of all, poverty.

The Salesians and other groups of the Salesian Family work in many African countries, making every effort towards giving new hope to children and young people, especially the most disadvantaged.

For example, the Daughters of the Sacred Hearts of Jesus and Mary, eighth group of the Salesian Family, have been active since 1987 in one of the most remote regions of Equatorial Guinea; amid lush mountains and spectacular waterfalls, they founded a mission they named after the Immaculate and that soon became a point of reference for all the area's children.

Initially, there were only 50 little ones attending the nursery school started by the nuns; now they are almost 300. The missionaries take care of the children, who all come from very poor families, by  providing primary care, which they desperately need, and affection.

The nursery school runs from 7:30 to 13:00, according to ministerial programs, while in the afternoon the mission hosts activities of play, sharing and prayer according to the Don Bosco Preventive Method.

In addition to moments of games, education and prayer, the missionaries want to give the children something equally fundamental: one complete meal a day. In a context of great poverty, neglect, disease (HIV, malaria, typhoid fever), the supply of a nutritionally balanced diet represents a guarantee against malnutrition and, consequently, the physical and cognitive deficits it causes, in this case for the 119 girls and 161 boys involved in the project.