India - Educating to diversity, starting with the Constitution 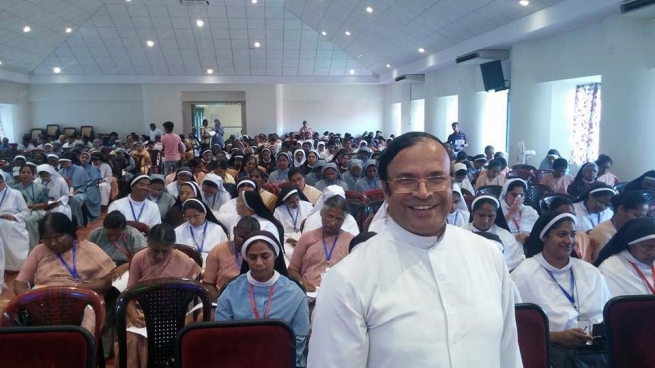 (ANS - Mumbai) - At a time when in India the public debate is occupied by identity issues and many are busy with raising walls, rather than building bridges, between different cultures, religions and traditions, the Catholic Bishops' Conference of India (CBCI) has given a mandate to all Catholic schools to read, comment and teach young people the Preamble to the Constitution of India, which promotes inclusive values among all citizens.

Fr Manipadam affirms to have taken the initiative after several of the country's Bishops had explicitly asked his Office to intervene, to contribute towards conveying to the young the values of the Constitution and "foster the authentic sense of Indian nationalism, the healthy patriotism based on constitutional values."

The 9-page document was drafted in 2016 by the Jesuits to be distributed among their schools, and leads students to elaborate on the 85 specific words that make up the Preamble to the Indian Constitution.

In practise, there are four phases: in the first, students are encouraged to memorize the Preamble, to use it on the days of the monthly assembly, to recite it in classes and to prepare speeches on it.

In the second, the deeper meaning of the Preamble will be explored through group discussions, themed quizzes, essays and research papers.

In the third passage, the expression with which the Preamble opens, "We, the People of India", emphasizing the cultural and religious pluralism of the nation, will be the center of focus and study. For this phase, suggestions are for short theatrical scenes aimed at demonstrating unity in the diversity of the Indian people.

Finally, the key words of the Preamble will be examined one by one: a republic that is sovereign, socialist, secular, democratic together with justice, freedom, equality, fraternity, and citizenship.

The Salesians in India animate hundreds of schools and educational centers, spread across 11 Provinces throughout the land, and constitute one of the largest private educational networks at the national level. Within the schools, many Human Rights courses and clubs have been activated over the years, and they will certainly be able to implement the CBCI initiative in the best possible way.