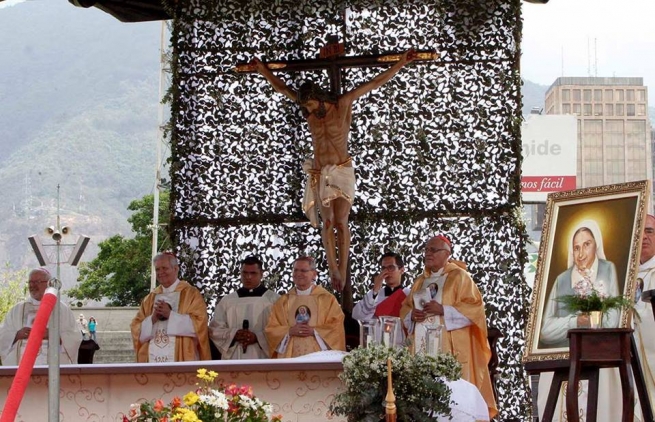 (ANS - Caracas) - In the midst of the political, social and economic crisis that Venezuela is experiencing, the Church never tires of announcing that the path of serenity and peace begins in the heart of every human being, and that the objective of every believer is holiness. In this context, the Salesian Cardinal Angelo Amato, Prefect of the Congregation for the Causes of Saints, representing Pope Francis, presided at the beatification ceremony of Mother Carmen Rendiles, foundress of the Congregation of the Servants of Jesus.

During the trip to Venezuela, the cardinal found time to visit the Provincial House of his Salesian confreres in Caracas. It was a fraternal meeting and a meeting between old classmates, as the cardinal studied Theology at the Salesian Pontifical University of Rome in the years 1964-1968, having among his colleagues the Salesians Fr Santiago Pról, Román Chena and mgr. José Angel Divasson, SDB, Apostolic Vicar Emeritus of Puerto Ayacucho, all present for the occasion.

The beatification ceremony of Mother Carmen Rendiles, the third Blessed of the Catholic Church in Venezuela, took place on Saturday, June 16, at the baseball stadium of the Catholic University of Venezuela. About 15,000 people attended the event.

Members of the various groups of the Salesian Family were present at this great feast of faith. The Eucharist began at 10 o'clock, presided by card. Angelo Amato, accompanied by the Archbishop of Caracas, card. Jorge Urosa, from the archbishop of Mérida, card. Baltazar Porras, by the apostolic nuncio, Msgr. Aldo Giordano and other representatives of the Episcopal Conference and Venezuelan clergy.

After the celebration, thousands of faithful and participants pointed out the difficult and harsh situation experienced by thousands of Venezuelans, shouting: "Freedom! Freedom!" At the same time, they also launched an appeal to Cardinal Amato: "Tell the Pope to come to Venezuela".

"Nothing is achieved by losing peace and union with God ... Let us always be at peace", was, in the end, the message of Blessed Carmen Rendiles.