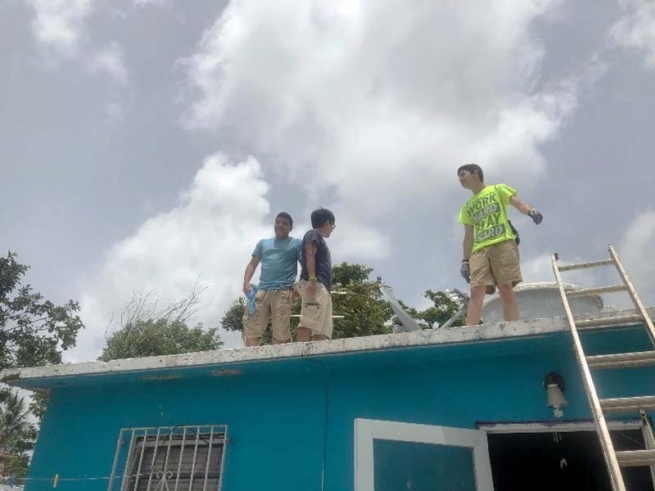 The effects of Hurricane María were still visible, nine months later, in the neighborhood. Fr. Carlos Piantini, one of the Salesian priests in Puerto Rico, identified five families connected to the local Salesian oratory that needed additional help after the hurricane. The DBCR students were able to meet the families, ask them about their needs, and then come up with a plan for each home where they worked.

Many of the families were caring for family members with disabilities, which made the physical work of clearing out the damaged spaces difficult, but the students had the strength and energy to remove damaged appliances and furniture. The students commented on the overwhelming scope of the work that still needed to be done and reflected on how the families were discouraged by just how much they had lost in the hurricane.

While the students spent most of their time working, they also found time to pray and to play. The group joined the congregation at Parroquia Maria Auxiliadora for Mass on Sunday morning, and they spent time in prayer and Scripture reading each morning and evening. They were thrilled to discover that Cantera is among the only places in Puerto Rico where soccer is king, so they were able to join in games with the students attending camp at Colegio San Juan Bosco, as well as a college team. Fr. Carlos introduced the students to a homemade frozen treat called limber, which all were eager to enjoy every day after lunch. They also particularly enjoyed chasing chickens with the families that they helped and playing with the pets at the various homes.

At the culminating activity, the students mentioned that they had felt a real sense of family connection as they worked with the families and played with the students at the camp. They are inspired to seek justice for those still suffering from the effects of Hurricane María, and they look forward to returning to Puerto Rico to visit their Salesian family on the island.