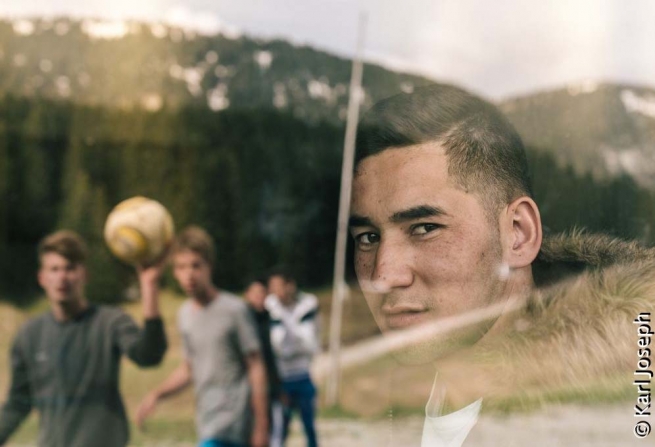 (ANS - Poisy) - Khairollah, a young 15-year-old Afghan refugee, with the strength of his testimony, inspired the students of the Institute of Environmental Sciences and of the Territory of Annecy (ISETA) to write a book, an institute associated with the Don Bosco Network.

At the age of 10, Khairollah is already an orphan and knows that he has no future in his country, Afghanistan, ravaged by an endless war. Furthermore, he belongs to the Hazara ethnic group, which has always been oppressed. For this reason, after leaving his city, Helmand, south of Kabul, in the summer of 2009, he spends four years to cross Iran, Turkey, Greece and Italy to finally arrive in France, in Annecy, in July 2013. His journey is marked by continuous returns and setbacks, always at the mercy of greedy and unreliable couriers who practice violence and human trafficking.

He risks death on overcrowded 4x4s running along the edge of precipices. He knows thirst, hunger, icy nights spent in the mountains - sometimes under the gunshots of the military - risks drowning in makeshift dens, is hunted by the Turkish and Greek police. He spends long stays in prison. He arrives in France without knowing a word of French and seeks help. Finally, the curse gives way to luck when he meets Charbanou, a Franco-Iranian doctor, and oher adults who give him the opportunity to learn and study.

A teacher then asked Khairollah to give testimony about his past to his classmates, who listen passionately to the events of this boy, a boy their age, full of life force. For months they recorded interviews with Khairollah, dividing the task into small groups. They transcribe the testimony of his life by retiring in a house in the mountains for two days to write. They draw his routes on the map and several identikits. They listen to writers, journalists and Dr. Charbanou, who helps them decipher the East, information that has them drop their prejudices about exile and immigration issues. They feel the desire to go beyond the scope of the school, to create awareness-raising events.

After intense and exciting teamwork, they manage to publish their book, entitled: "Carnet d'exil, le voyage de Khairollah" (Diary of exile, the journey of Khairollah).

As for Khairollah, he would like to bring his little brother to France, who had to leave behind, because he was still too young, in the care of his neighbors.