India – Call to Serve in the Lord's Vineyard 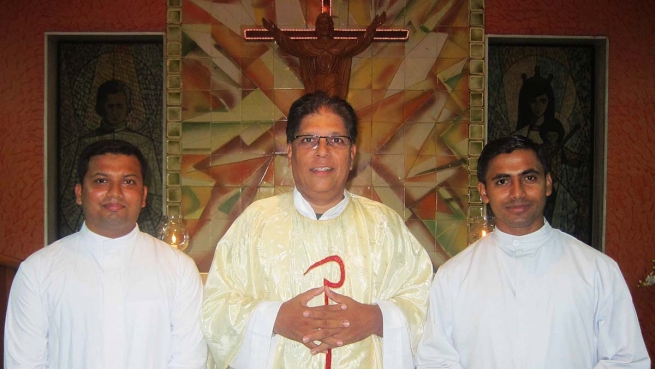 (ANS – Mumbai) – The Salesians of the Province of Mumbai bid farewell to the two young Clerics: Sheldon Dias and Nilesh Dodiyar during the Eucharistic celebration celebrated by Fr Godfrey D’Souza, Provincial of the Salesian Province of Mumbai, at the Don Bosco Provincial House Chapel along with the neighbouring Salesian Community members on Wednesday 27th July, 2018.

Father Godfrey D'Souza during the sermon exhorted them to live by the constitution and enumerated on the points given by Don Bosco to the Salesians on their 1st missionary expedition in 1875. He encouraged both the Clerics to ''bear good fruits and to be in union with God always''.

Cleric Sheldon Dias is a man on a mission. He has opted for the Salesian missions and entrusted his future in the hands of the Rector Major of the Salesians, Father Ángel Fernández Artime, the 10th successor of Don Bosco. He has been assigned to the Gambia, AFO Province. Brother Dias left for Rome where he will first learn Italian and then after a preparatory course will be given the Missionary Cross and sent to a Salesian mission station.

His father Mr. Victor Dias, presently works as an Insurance agent and is part of the association of the Legionary of Mary. His mother Mrs. Leera Dias, Salesian Co-operator from Don Bosco Borivali, is currently a counsellor in Bosco Boys Home, Borivali. He is the youngest son and has two older sisters Siana and Serene. When his parents enrolled him at Don Bosco, Lonavla boarding in standard nine, they never envisioned this future for their son, yet they have been very supportive in giving their only son to God.

“I have always been in a Salesian school, so I am very enthused by the Salesians. I met and spoke to Father Clifford Morias, a Salesian priest, who went on a mission to Papua New Guinea and I felt very inspired,” Brother Dias said.

His attraction to serve in unchartered territories began with his training in the missions in Gujarat, where he worked with tribal boys. He lived their lifestyle and felt that his contribution to their growth was one of the most enriching experiences in his life. He completed his Technical Studies in Welding at Don Bosco Vyawasaik Prashikshan Kendra, Chinchwad, and also enjoyed working with poor youth in a technical set up.

Cleric Nilesh Dodiyar has been assigned by the Rector Major to Belgium. His father, Mr. Dhuliya Dodiyar, is a farmer and his mother, Mrs. Sabina Dodiyar, is a housewife. They are from Banswara District, Tambesara, Rajasthan. He is the second child and has three brothers Jitendra, Shailender and Rohit.

Brother Dodiyar studied with the Holy Cross Sisters at Shanti Sadan. “I went to Don Bosco, Kapadvanj, to learn English. I had planned to join The Order of Friars Minor Capuchin, but after visiting the vocation camp at Don Bosco, Kapadvanj, I decided to join the Salesians. The Salesians have a great rapport with the poor youngsters and I loved the rural mission work and this inspired me,” said Brother Dodiyar.

He completed his initial formation and has now completed his Bachelor of Philosophy from the Salesian Institute of Philosophy, Divyadaan, Nashik. He added, “I thank my formators for having guided me to discern my calling for this way of life. I guess I will need to learn a few foreign languages to work in the mission of Belgium viz, French, Dutch and German.

Brother Micheal Gaikwad is one of the Saleisans who inspired me to go to the missions and work for the Lord’s vineyard. I prefer to work for the migrants, especially the refugees. It was really great working in the mission of Gujarat”.