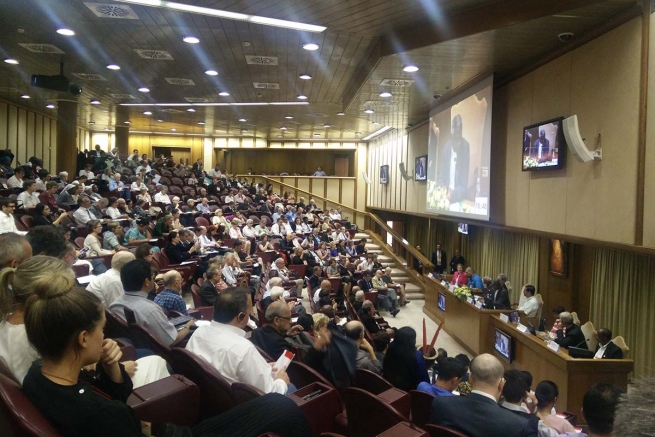 (ANS – Vatican City) – A conference titled “Saving Our Common Home and the Future of Life on Earth” was organized by the Vatican Dicastery for Promoting Integral Human Development to celebrate the third anniversary of the publication of Pope Francis’ encyclical Laudato Sì. This conference, held over two days on 5-6 July at the Synod Hall in the Vatican, brought together about 400 delegates, which included environmental experts and activists, scientists, economists, politicians, representatives of various global networks, as well as high-ranking UN officials. The Don Bosco Green Alliance was represented at the conference by Fr. Savio Silveira, SDB, and Mr. Macson Almeida.

The conference opened with a panel of five young people from five different continents presenting their views on the environmental crisis and their personal reflections on the impact of Laudato Si'.  Macson Almedia speaking as one of the panellists said, “The Don Bosco Green Alliance is a global initiative that has been recently launched, inspired by Laudato Sì.  This alliance is an international collective of young people who are working together to contribute towards global environmental action, thought and policy.  We young people must work without borders, shed our national identities and assume the identity as residents of one planet.”

A key highlight of the conference was the audience with Pope Francis. Addressing the delegates, Pope Francis said, “Your presence here is a sign of your commitment to take concrete steps to save the planet and the life it sustains, inspired by the Encyclical’s assumption that 'everything is connected'.”  The Pope expressed his hope that “concern for the state of our common home” would be translated into concrete actions to preserve the environment.

The Pope also stressed the importance of making space for young people in efforts “to foster an integral ecology.” Quoting from Laudato Sì, the Pope said, “Young people demand change. They wonder how anyone can claim to be building a better future without thinking of the environmental crisis and the sufferings of the excluded”.  “It is the young who will have to face the consequences of the current environmental and climate crisis. Consequently, intergenerational solidarity “is not optional, but rather a basic question of justice, since the world we have received also belongs to those who will follow us,” the Pope added.

After two days of inspiring presentations and intense discussions, the conference closed with the call to bring environmental work into the mainstream of the Church’s mission.  It stressed that all church institutions should lead by example when it comes to offering environmental solutions. Young people are important stakeholders in this matter and must have the space to act. Fr. Joshtrom Isaac Kureethadam, SDB, Coordinator of the Sector on Ecology and Creation in the Dicastery for Promoting Integral Human Development, was one of the main organizers of the conference.