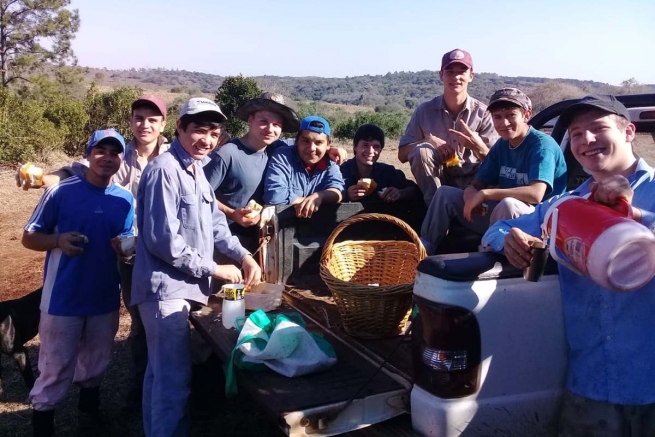 (ANS - San José) - Currently there is a deterioration of the global environment, and Pope Francis says: "I renew the dialogue with every person who lives on this planet ... This “sister earth cries out to us because of the harm we have inflicted on her by our irresponsible use and abuse of the goods with which God has endowed her." On the World Day of Soil Conservation, celebrated annually on July 7, in memory of a person who managed to increase the production of the earth by protecting it, Hugh Hammond Bennet, the young people of the Salesian Agricultural Institute "Pascual Gentilini" have animated various activities related to the anniversary.

Recalling the need for soil conservation, the students began the day at the headquarters of the "Pascual Gentilini" institute in San José, Province of Misiones, with the participation of about 300 high school students from all over the area.

Under the motto "a thin layer of soil surface is what lies between us and disaster", a theory-based seminar followed. This year's focus was the high rates of soil degradation in the province and on the actions needed to keep it fertile.

Subsequently, those present visited the school facilities, where the students of the institute explained the concrete activities they perform in the pursuit of soil conservation.

Preserving the land is one of the basic fundamental tasks of this era, why Pope Francis, in the encyclical Laudato sì, insists on the need to "take care of the soil." And he affirms this in several points of the text: "The violence present in our hearts, wounded by sin, is also reflected in the symptoms of sickness evident in the soil, in the water, in the air and in all forms of life." (paragraph 2); "...that human beings pollute the water, soil, air: all these are sins." (paragraph 8); "There is also pollution that affects everyone, caused by transport, by the fumes of industry, by the landfills of substances that contribute to the acidification of soil and water." (paragraph 20); "Soil, water, mountains: everything is, as it were, a caress of God." (paragraph 84).

The Holy Father insists on the need to protect the soil and Salesians are also called to educate the young so they understand the need to care for its conservation.

Days such as the recent event experienced at the Salesian Institute aim to raise awareness on the current state of a non-renewable resource such as soil and to promote projects that emerge from those who should be the main protagonists of this commitment: young people.