Nicaragua - "In the midst of anguish and pain, the Nicaraguan people haven't lost hope" 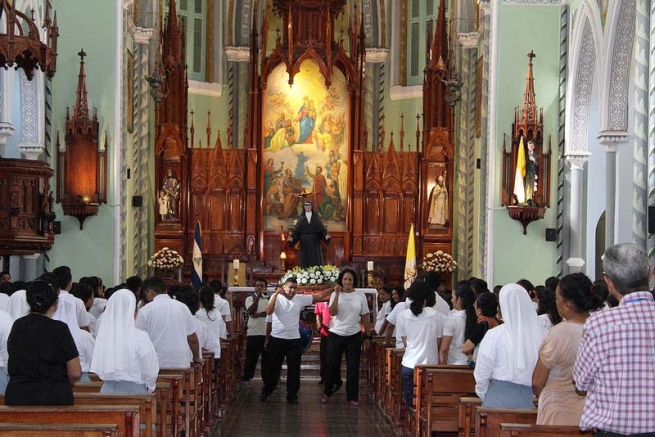 Photo: celebration of the feast of the blessed Sr. Maria Romero Meneses, FMA

(ANS - Managua) - The Nicaraguan nation is experiencing one of the deepest crises in its history. A people that has denounced the arbitrariness of the government, which represses it, annihilates and arrests it. No one can go out to "protest", not even in the presence of international human rights organizations. The population is experiencing much pain and anguish.

The national dialogue has been interrupted. The bishops of the episcopal conference continue their pastoral mission by accompanying the people. On Monday, July 9, they embarked on their visit to the Department of Carazo, in the municipality of Diriamba, massively besieged by paramilitaries, police and government groups.

On their arrival, they were physically and verbally attacked, in a premeditated way. The delegation was led by the Apostolic Nuncio, mgr. Waldemar Stanilaw Sommertag, from the Archbishop of Managua, Cardinal Leopoldo Brenes, and his auxiliary, mgr. Silvio Báez, together with other priests who retreated as they went to free refugees in the minor basilica of San Sebastian.

The pressure was so great that it resulted in beatings. In the middle of the struggle, the auxiliary bishop and several priests were injured and access to the temple was prevented. Government-related groups have others believe, by their actions, that the Church supports violence.

On the same day, the parish church of St. James the Apostle in Jinotepe was sacked by paramilitary groups and groups affiliated to the government, who entered the church violently to destroy what they could.

The government of Daniel Ortega has launched a strong and clear threat against the Catholic Church. By all possible means, they want the population to believe that the church is promoting violence. For their part, the bishops reaffirm their commitment to the population, remaining close to those who suffer, and on the side of those being besieged by the ideology of a ruler who clings to power, who has lost all credibility and promotes a "camouflaged peace".

The Salesians continue to firmly stand by and accompany the locals and to adopt security measures. The Salesian center of Managua, for one, is back to its normal activities. In Masaya, the violence has not stopped, while threats of looting the temples continue. In Granada, the Salesian house continues with its activities, but the Eucharistic celebrations take place behind closed doors.

In the midst of this anguish and pain, the Nicaraguan people have not lost hope. Today, Wednesday 11 July, an army raid is scheduled in Moninbó, Masaya district. For Friday 13, instead, a 24-hour national strike has been organized.