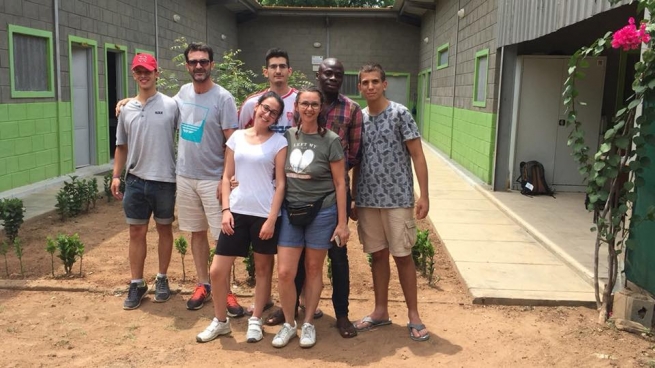 (ANS - Tonj) - For the eighth year, students, parents and collaborators of the Salesian House in Sesto San Giovanni, Italy, spend several weeks of their summer break in the city of Tonj, South Sudan, to serve and bring help to the local population.

Six students attending the Sesto San Giovanni vocational courses in thermal-hydraulic, electric and motor repair/installations departed for South Sudan along with two parents. The project also involves other members of the Salesian Family as well as friends and supporters of Don Bosco from a number of Lombardia-region contexts ranging from the Salesian past-pupils of Treviglio to the volunteers of Vallecamonica.

A first group reached the mission shortly after mid-June; a second in the first half of July. Waiting for them all were the smiles and hugs of many grateful South-Sudanese children and youths.

Also alongside the volunteers is Fr Omar Delasa, Salesian, Head of the association that promotes this twinning, the NGO: "Tonjproject Onlus".

The objective of the missionary expedition is to bring help to the hospital that the association has built and officially inaugurated on July 26, 2014, thanks to the precious contribution of the Pesenti Family of Bergamo. The volunteers are responsible for the ordinary and extraordinary maintenance of the hospital and of the small house of the volunteers, especially the infrastructures' electrical/plumbing systems.

For one, the students of the Vocational Training School in Sesto San Giovanni have studied and installed a photovoltaic system for producing electricity, and set up a water purification system for the water well.

In Tonj, volunteers, young and old, discover themselves to be bricklayers, plumbers, carpenters, electricians, nurses, farmers and animal breeders. And throughout, they spend these two months of alternative vacations wherein they come to know, learn and put their skills in their respective fields into practice!