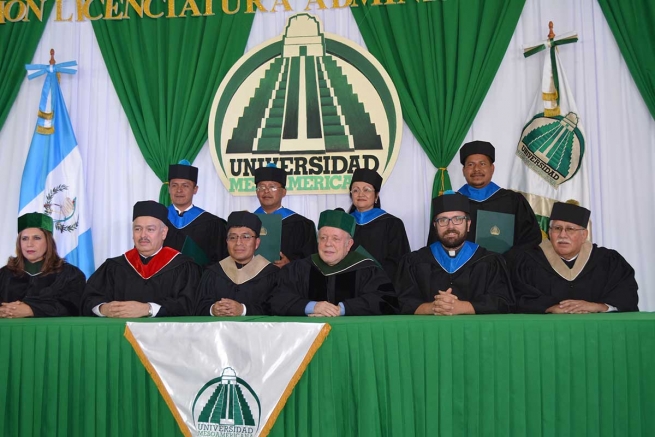 With the support of a university, it was possible to present a proposal for a strategic alliance and joint work between the Mesoamerican University at San Pedro Carchá and the "Talita Kumi" Foundation, where "Talita Kumi" represents the inspiring expression of a pastoral educational project applied in the Salesian mission of Carchá, Guatemala. Fr Jorge Puthenpura, a Salesian from India, had the audacity to "invent" a model of female religious life within the local indigenous culture, the qeqchi culture. In this context live the religious who preserve the charism in the typical forms of the local culture.

July 14th was, in every way, a historic day for the beginning of this adventure in Higher Education. The Mesoamerican University, with its less than four years of existence, is growing at a surprising pace; from the 44 students who started in 2015, it already has 564 in 2018, with a percentage growth of 1,400%!

The Mesoamerican University began offering courses in Pedagogy; the following year, it  added Educational Administration and Educational Sciences; in its third year, the faculties of Social Work and Bilingual Primary Education were opened; and the Agronomic Engineering course in its fourth year.

Although there are four university facilities in the neighboring city of Cobán, Fr Puthenpura sensed that there was room for this bold project: an offer of higher education that would cover the needs of the region. In fact, the government does not offer a university educational proposal, as most of the population lives by working the land and cultivating their fields and farms.

The philosophy behind this innovative project of higher education is based on the Salesian spirit, which is oriented to the human and Christian promotion of young people, to students who attend their courses, and to those who will benefit from the services that will be offered by professionals formed at the University.

The Mesoamerican University present in San Pedro Carchá is also an important part of a much more ambitious and broader project: for years "Talita Kumi"has been promoting the leadership and empowerment of thousands of indigenous women and it has extended to the departments of Quiché, Izabal, Petén and Alta Verapaz.