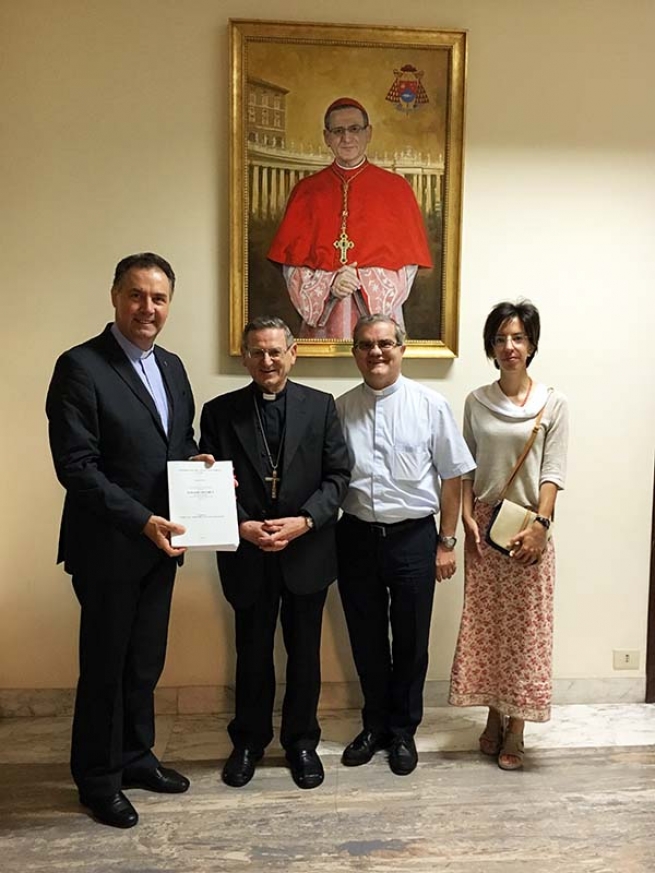 (ANS - Vatican City) - On 20 July, during the visit the Rector Major, Fr Ángel Fernández Artime, accompanied by Fr Pierluigi Cameroni, Postulator General, and Dr Lodovica Maria Zanet, a Postulator collaborator, made to Cardinal Angelo Amato, Prefect of the Congregation for the Causes of Saints, the volume of the Positio super Vita, Virtutibus et Fama Sanctitatis of the Servant of God Ignazio Stuchlý, Professed Priest of the Society of St. Francis of Sales, was presented.

As speakers, the Positio featured Fr. Zdzisław Kijas, OFM Conv., as Postulator Fr Pierluigi Cameroni and as collaborators Dr. Lodovica Maria Zanet, Fr. Jan Ihnát, SDB, and Fr Petr Zelinka, SDB. The structural elements of the "Positio" - which presents in an articulated and in-depth way all the documentary and testative probationary apparatus concerning the virtuous life of the Servant of God - are: a brief presentation by the Speaker; the Informatio super virtutibus, that is, the theological part in which the virtuous life of the Servant of God is demonstrated; the two Summarium with the testimonial and documentary proofs; the Biographia ex Documentis. After consignment, the Positio will first be examined by the historical Consultors of the Congregation for the Causes of Saints.

The Servant of God Fr Ignazio Stuchlý was born in Bolesław, in the former Prussian Silesia, on December 14, 1869, in a large family of peasant farmers. A young man tenacious in his commitment and firm in hope, he is accepted among the Salesians in 1894. He arrives in Turin on September 8th, and lives the formation stages in Valsalice and Ivrea: he is in contact with the great Salesians of the first generation. Initially destined for the missions, by order of Fr Rua the Servant of God remains in Italy and prepares to support the growth of Salesian works in the Slavic areas. He is then in Gorizia (1897-1910); Slovenia, between Ljubljana and Verzej, until 1924; then, from 1925 to 1927, he was in Perosa Argentina, where he formed the new recruits to establish the Salesian Congregation "in the North". In 1927, he returned to his homeland, to Fryšták, and there he also held government positions, including the inspectorate, from 1935.

After the broader consequences of the Balkan War and the First World War, he faces both the Second World War and the spread of Communist totalitarianism: in both cases, Salesian works are requisitioned, the confreres enlisted or dispersed, and he suddenly sees the work he had consecrated to life destroyed. Forty days before the fateful "Night of the Barbarians", in March 1950, he was struck by apoplexy: the lively esteem he had always aroused in his superiors, and his great ability to love and be loved, flourished more than ever in the fame of holiness. He died peacefully on the evening of 17 January 1953. Economer, prefect, vice-director, director, provincial, the Servant of God held positions of responsibility for a large part of his life. A little like Blessed Fr Rua, taken as example, was considered a "living rule", an effective witness to the spirit of Don Bosco and capable of transmitting it to subsequent generations.

A man who had lived in many different geographical, linguistic and cultural realities (such as today's Moravia, Bohemia, Slovakia, Poland, Slovenia, Italy), even in border lands, the Servant of God proposes himself today as a man of peace, unity and reconciliation among peoples.