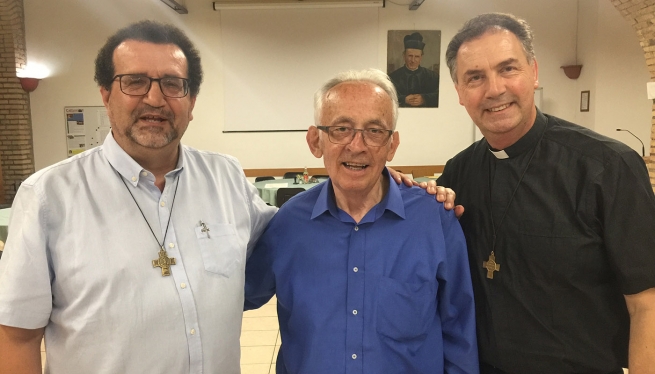 (ANS - Santiago de Chile) - On Sunday 24 August 2014, the Salesian Fr Mario Scomparin, Italian, a missionary in Chile, received a first recognition for his missionary service and on the occasion declared: "During these 50 years I have always been a missionary. In the places where I have worked, I felt like a missionary and I brought the Word of God." For his pastoral work and his dedication to service among people, he will now be awarded with the "Santiago Apostle Cross".

In fact, the award is attributed to people who live the testimony of Jesus Christ as true disciples and missionaries, a form of recognition for the precious services given to the Church of Santiago, in different fields, such as evangelization, pastoral care, human promotion, Catholic education and charity, especially in this Year of Mercy.

Fr Scomparin receives this award for his missionary work in Chile. "Father Mario has lived and worked intensively in the formation of various leaders," said a parishioner, "especially in the Youth House and in the Parish." Another person who knows the life of the priest said, "I want to thank him for his service and his priestly heart. We know that he is an avant-garde priest, he is an extraordinary pastor. He is a priest who is with the people."

Fr Mario Scomparin made his first religious profession on 16 August 1954 and was ordained priest on August 22, 1964.

He will receive the "Santiago Apostle Cross" on Wednesday, July 25th, in the Cathedral of Santiago de Chile. Mass and the awards ceremony will be presided by Cardinal Ricardo Ezzati, SDB, archbishop of Santiago.

The city's Patron saint is also celebrated on July 25. This year marks 457 years of the archdiocese service towards the city's evangelization and awards to a number of people shall be consigned for their pastoral work.

The "Santiago Apostle Cross" is awarded to people who have contributed significantly to the archdiocese as lay faithful, priests and religious, and in this context the name of Fr Scomparin emerges spontaneously, a sign of gratitude for his pastoral service.

Fr Scomparin was director of the Salesian house in the South area of La Cisterna, where in 2005 he received the recognition of "Vecino Destacado" of the municipality.