Argentina - The soul vibrates in Rodeo del Medio, in the Shrine of Mary Help of Christians 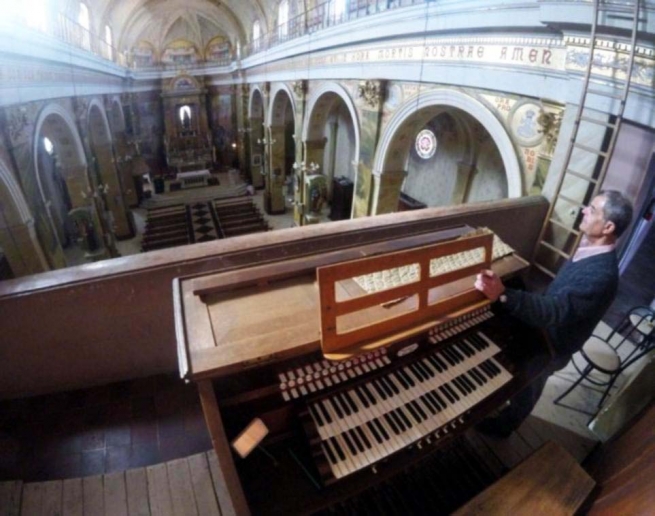 (ANS - Rodeo del Medio) - The Shrine of Mary Help of Christians of Rodeo del Medio hosts the best organ in all of Argentina. It was donated by General Rufino Ortega (father) and used for the first time over a century ago.

"An oratory without music is like a body without a soul," said Don Bosco to emphasize that the role of music in a Salesian house is of the utmost importance. In fact, singing is a form of prayer that expresses the characteristic joy of the Salesian charism. Don Bosco himself, according to the writings that allude to his life, "knew how to play the piano and the organ fairly well."

The organ of the Shrine of Mary Help of Christians in Rodeo del Medio is considered the best in Argentina and is a pride for the faithful of the province of Mendoza. This instrument was manufactured in Germany by the "Ibach" firm in Barmen, at the request of General Ortega, 100 years ago.

According to the newspaper "Diario Uno" of Mendoza, it was General Ortega who, together with Fr Aquiles Pedrolini, SDB, traced the streets of Rodeo del Medio. The Salesian was also the one who started Salesian work in Rodeo del Medio and who played the organ for the first time in 1909.

Some of the pipes were made from fir trees. For this reason, they emit a sound comparable to an orchestra double bass. But the organ itself, according to the key in which it is played, can also emulate the human voice, a flute, a trumpet, an oboe and many other instruments.

Lucila Barrionuevo de Bombal, instead, was the one who donated the land and supported the construction of the sanctuary building, 109 years ago. The project was entrusted to the Salesian architect Fr Ernesto Vespignani.

The decorating is the work of the Spanish artist Antonio Estruch and his brothers, who finished the painting work on February 22, 1916. In 1916 the bishop of Cuyo, mgr. José Américo Orzali, designated the sanctuary as the site of the new parish dedicated to Mary Help of Christians. The parish is responsible for the care of the chaplaincies in the area of Rodeo del Medio and surroundings and works for the needy and religious formation through different groups.