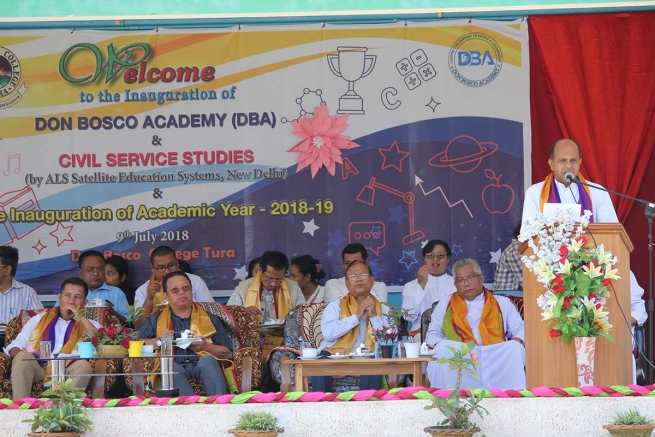 (ANS – Tura) – The Salesian Province of Guwahati (ING) has inaugurated in July a centre for training India’s “creamy layer”, the civil service officers of the country in Tura, Garo Hills. Christened Don Bosco Academy (DBA), the centre provides training in collaboration with India’s premier civil service trainer, Alternative Learning Systems (ALS) at Don Bosco College, Tura. The centre aims to reach out to students of Garo Hills and adjoining regions. It has the backing of the entire province, the local church, government and lay collaborators.

Classes at DBA taught by an experienced faculty, are beamed live from New Delhi via satellite and the students in Tura are able to attend the classes and interact with their teachers in real time along with thousands of students across the country. DBA aims to provide access and quality training to aspiring students from the region. Many students who cannot afford to go to the national capital to pursue their dream is able to do their studies in their own town.

This activity is an additional service of the Salesian Province of Guwahati besides the 31 year old Don Bosco College and fifteen year College of Teacher Education and the decade old Assam Don Bosco University and several other higher educational institutions.  The Salesian institutions in the Garo Hills region alone have some 10, 000 students pursuing various levels of education from primary school to college.

Speaking of the civil service coaching program in Tura, Fr George Plathottam, founder Director of DBA, said the centre intends to provide opportunity to students who have the motivation, desire and ability to pursue advanced careers in government service and civic leadership.  Compared with other states in India, Northeast India has a very low representation in the top administrative services of India. This is not due to dearth of talent but due to lack of access and opportunity.  We hope to bridge the gap in the coming years. DBA’s future plans include offering training in the national level entrance examinations in medicine and engineering, using the same V-SAT technology and coaching offered by ALS.

The Salesians of Don Bosco, who are pioneers in education in the region, hope to form many successful leaders from the region who will serve the country. Don Bosco Academy would be able to offer qualitative and sustained coaching to aspiring students to crack India’s most sought after civil service examinations.  Meghalaya Chief Minister Conrad K. Sangma, son of the most outstanding tribal leader from the region and a Don Bosco past pupil  Purno  A Sangma, has extended enthusiastic support to the project. Mr. Augustine Tigidi, the first Indian Administrative Service (IAS) officer from the Garo tribe, another outstanding Salesian past pupil, has offered to render voluntary support to DBA by being a mentor and advisor to its students. Now retired from India’s civil service after a distinguished career and living in Tura, Mr Tigidi said he is grateful to the Salesians who educated and supported him to pursue civil service.

DBA Director Fr Plathottam said, “We are focused on training leaders with competence and commitment to serve the people. We will do everything possible to ensure the students get the best of attention to become successful. We also want to offer youth other courses suited to provide quality training in personality development, soft skills and leadership, and prepare them to meet the challenges of the times to become good leaders in society as dreamed by Don Bosco “We are overwhelmed, he added, “by the support of the government, civil society, public and the local church leadership.”

The Catholic missionary work in Garo Hills was pioneered by two Italian Salesians Fr A. Pianazzi and L. Rocca in 1932, ten years after the Salesians first came to Northeast India. As the Salesians are on the threshold of the first centenary of their presence in Northeast India, there are three provinces in the region and Don Bosco is a well known name in education with a wide network of schools, technical institutes, colleges and a university, providing quality education.