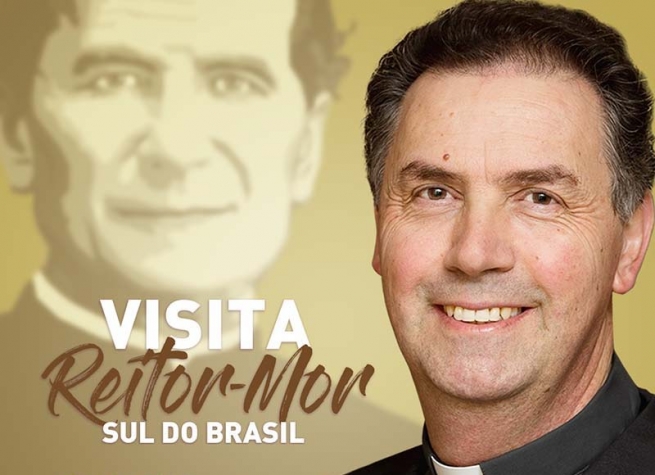 (ANS - Rome) - After the work sessions of the General Council, the Rector Major, Fr Ángel Fernández Artime, immediately resumed his commitments to bring the embrace of the Successor of Don Bosco around the world. From 1 to 12 August he will be in Brazil, visiting the Provinces of Porto Alegre (BPA) and Belo Horizonte (BBH).

At the "St Pius X" Province of BPA, the Rector Major will arrive in the late afternoon of Wednesday, August 1st. On Thursday 2, he meets with the Provincial Council and visit the elderly and sick Salesians and Daughters of Mary Help of Christians.

He will dedicate Friday to meeting with the Salesians, young people and members of the Salesian Family active in the works of the Rio Grande do Sul State; on Saturday 4, in Curitiba, he animates the spiritual Sons of Don Bosco of the States of Paraná and Santa Catarina and then aspirants, prenovices and Salesian novices.

On Sunday, August 5, in Joinville, he presides over the solemn Mass for the 60 years of the Province, and celebrated by the local Salesian Family and youth.

On the morning of Monday 6, the second stage of his journey will begin, reaching the "St Giovanni Bosco" Province of BBH and immediately meeting the Salesians in formation.

Tuesday 7 at the International Salesian Congress on Education, Fr Á.F. Artime will hold a conference on the theme "the art of listening and accompanying in Salesian educative-pastoral action", in light of Strenna 2018 and the Synod on Youth; in the afternoon, he will meet the vulnerable young people  hosted in "Casa Dom Bosco" of Belo Horizonte.

On Wednesday 8, a more Salesian day includes a meeting with the Salesians of the Province, the Provincial Council, the elderly and sick Salesians and, in the evening, he meets with the local ecclesiastical authorities.

In Brasilia, Thursday, August 9, the Rector Major presents the Portuguese edition of the "Biographical Memories" of Don Bosco and animates the Salesian Family gathered at Núcleo Bandeirante. On Friday 10, he will dialogue with the Salesians and local ecclesiastical authorities and preside over the Mass for the sending off cerimony of the Salesian Missionary Youth.

Saturday 11 and Sunday 12 are entirely reserved for the Youth and the Salesian Family: on the first day, through various moments of catechesis and dialogue between the Rector Major and the young people and an evening feast; in the second, with a great pilgrimage from the cathedral of Brasilia to the Shrine of Don Bosco.

All the photos of the visits will be available on Flickr.