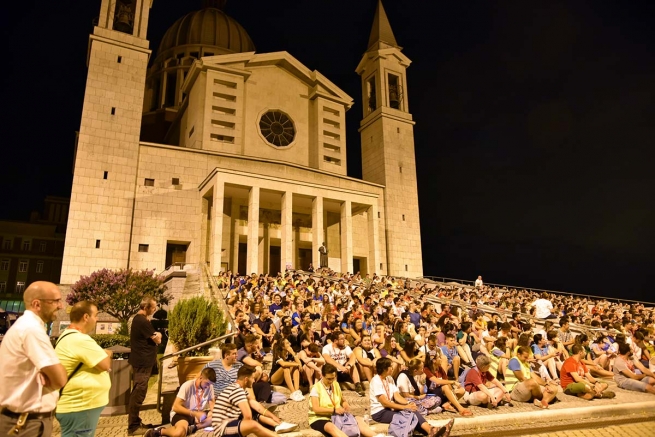 (ANS - Castelnuovo Don Bosco) - "We started the journey at Colle Don Bosco, a great adventure, a beautiful meeting with the participation of 650 people from five Provinces," said Fr Leonardo Sánchez, communication manager of "Campobosco 2018". In fact, 11 buses full of young people arrived in the place where one of the greatest saints of history was born, with the sole purpose of making a pilgrimage to the sites of the Saint of the Young: Don Bosco.

Young people have come to places where the history of Don Bosco cannot only be read and studied, but above all can be felt. The first activity the participants did when they trampled the Salesian soil was to put a scarf on the statue of Don Bosco, as if to say: "Don Bosco, you too, participate in this Campobosco!"

The great adventure began on Sunday, July 29, with the young people of the Salesian Youth Movement (MJS) of Spain and Portugal. There are many new features compared to the last edition, held four years ago. Among these, it is worth pointing out the creation of an app containing all the information of this youth meeting: "Campobosco 2018".

The app was developed by Carlos Magán, animator of the Atocha Youth Center in Madrid, and simulates a travel notebook in which it is possible to consult the materials of the meeting, the timetables, the program of visits, the arrangement of the groups.

This meeting is aimed at young people over the age of 19 who have had experience within Christian groups and, preferably, animators in the Salesian youth centers. The participants go on pilgrimage to the places where the Salesian charism of Don Bosco and Mother Mazzarello was born and spread.

The starting point was Barcelona, the city visited by Don Bosco in 1886, two years before his death. After crossing France, on 31 July they arrived at Colle Don Bosco, also called "i Becchi", where Don Bosco was born. From there to Chieri, in whose seminary the founder of the Salesians formed as a priest, and they will then reach other important places and towns of his life. They will also cross Mornese, motherland of Mother Mazzarello, co-founder together with Don Bosco of the Institute of the Daughters of Mary Help of Christians (FMA).

Turin is the last destination of the pilgrimage, where they will visit the first Salesian oratory and the Basilica of Mary Help of Christians in Valdocco. On gathering in the crypt of the Rector Majors, they will be able to hear again the words that Don Bosco told Michele Rua: "we will go half", an expression from which the title of this Campobosco 2018 was drawn.