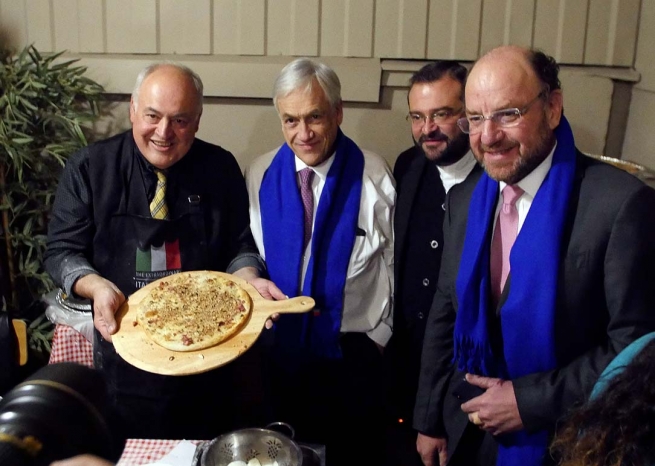 (ANS - Santiago) - Last Thursday, July 26, the President of the Republic of Chile, Sebastián Piñera, visited the teenage shelter "Nueva Luz", of the "Fundación Don Bosco", in the municipality of La Reina, a suburb of Santiago. The meeting originated from an invitation addressed to the Minister of Social Development, Alfredo Moreno Charme, and to the Minister of National Heritage, Felipe Ward Edwards, on the day of the center's inauguration.

As some may recall, on 29 June 2018 the center of La Reina became a home for street children, taking the name of "Nueva Luz", thanks to a public-private partnership between the "Fundación Don Bosco", "Sodimac", a private company, and the Chilean government. In this way, it today constitutes the first house of this type, built from a government project.

Minister Moreno said, "The children of the 'Fundación Don Bosco' who were housed in La Moneda had recently asked us for shelter, because the structure that had housed them previously had gone into flames. This is the answer we have given them." In fact, to create the project, the minister had invited various institutions, public bodies, private and civil, to form an alliance, which allowed for an immediate completion of the project.

Dr Moreno also recalled the words of President Piñera when he learned of the consignment of the center to the Salesian foundation: "Make good use of the house, and without a doubt, this is good use, indeed."

In his visit to the "Nueva Luz" house, President Piñera greeted all the children and teenagers being hosted. For the occasion, there were also Fr Carlo Lira, Provincial of the Province of Chile, Fr Víctor Mora, President of the "Fundación Don Bosco", Sergio Mercado, Executive Director, and Florencio Colilaf, Director of the House; in addition to the two ministers, the government structure also saw the participation of the Undersecretary for Social Services, Sebastián Villarreal, and Catherina Rodríguez.

The President of the Chilean Republic shared time in dialogue and tasted a pizza prepared by the young guests of the center, guided by Nello Gariullo, Vice-President of the foundation's directorate.

According to recent data, in Chile there are over 700 street children, of which more than 370 in the metropolitan region of Santiago. The "Nueva Luz" house is a ray of light for hundreds of minors who spend their lives in the streets.