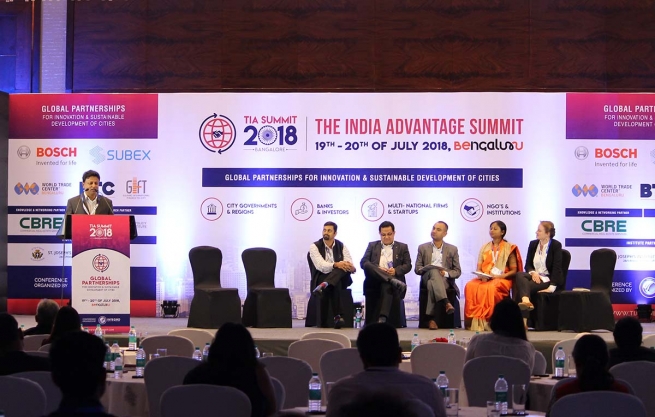 (ANS – Bangalore) – What could BREADS possibly have in common with Blockchain technology evangelists? Not much, really. But as a strategic partner and member of the advisory board of The India Advantage (TIA) Summit, BREADS did meet with them in Bangalore on 19th and 20th July, 2018. It was a very interesting and stimulating experience where global partnerships for innovation and the sustainable development of cities were explored.

A buzzword was smart cities. And yet another was innovation. The summit brought together local governments and city representatives, banks and investors, multinational technology giants like BOSCH, Infosys, Subex; startups, research institutions and NGOs. The summit also showcased model smart cities: BTC city in Ljubljana, Slovenia, and the Gujarat International Finance Tec-city (GIFT) in Ahmedabad, India.

Everyone agreed that the situation in urbanized India was dangerous and would only get more alarming. Various indicators were put forward, a couple of them being: 40% of the Indian population will live in cities by 2030, contributing 60% of GDP. Existing structures and systems simply could not bear up under the stress of such numbers. On the other hand, the environment is being speedily ruined. Bangalore, as an example, now has 70% of its area under construction. Lakes with water have decreased from 280 in 1960 to 25 today. None of the existing lakes contain potable water.

Against this backdrop, with the need for urgent intervention, most of the presenters put forward their innovations and initiatives in the fields of technology, energy, planning, smart structures and systems. While it was all interesting to hear, only 2-3 people addressed the actual people who were supposed to populate these smart cities. And the only one who brought the marginalized sections of society into the picture was BREADS.

The question that Fr. Joy Nedumparambil from BREADS asked and that resonated with most people was: Whose city is it anyway, smart or otherwise? A smart city needed to include all sections of society and provide access to social and economic opportunities for all people. He stressed that inclusion was not a privilege but a right. It would also make great economic sense. He put forward the possible roles an NGO could play in the sustainable development of cities, and how BREADS in particular, was already contributing to this cause. As service provider, as facilitator, as innovator and as advocate, BREADS presented the various facets of its work in the field of human-centric development.

An important learning from the TIA summit is this: that as NGOs, we need to understand the directions in which the world might be moving in order to be able to communicate effectively; and thereby, to influence the ways in which the new directions impact human life, especially those of the vulnerable and marginalized in society. We need to stay relevant in a changing world to ensure that the people we want to represent also stay relevant in the emerging futures. Another angle to being in the world, but not of the world.