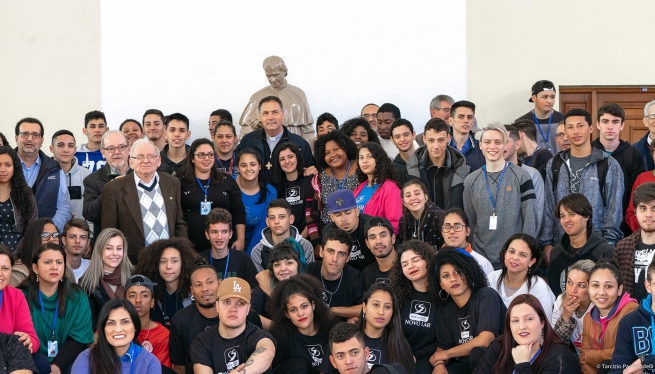 (ANS - Porto Alegre) - On the night between 1 and 2 August, the 10th Successor of Don Bosco, Fr Ángel Fernández Artime, arrived in Porto Alegre to begin an animation visit to the Salesian Province "Saint Pius X" of Brazil-Porto Alegre (BPA). The Rector Major was welcomed at the airport by the BPA Provincial, Fr Asídio Deretti, by the other members of the Provincial Council, Salesians and aspirants of the Salesian house of Viamão, Daughters of Mary Help of Christians and a group of people from Massaranduba.

Yesterday morning, 2 August, the Rector Major met with the BPA Council at the Provincial House to learn about challenges and prospects and to illustrate the guidelines of the General Council.

In the afternoon, with his secretary, Fr Horacio López, the Rector Major went to Viamão, a city near Porto Alegre, for a doubly significant visit: there, in fact, the spiritual Sons of Don Bosco do social work that concerns itself with prevention and recovery of children living in the streets and with a troubled past, and also run a home that houses elderly or ill Salesians.

Addressing his elder confreres, the 10th Successor of Don Bosco reminded them that even if they can no longer be with young people and children in the courtyard, they can always keep them in their hearts and benefit them through prayer and the offer of their daily lives.

Instead, in his visit to the social center, the Rector Major was welcomed by the students and the educators with the usual youthful joy, displayed through songs and dances performed by the students of the "street dance" course. And for his part, he encouraged them to make the most of the opportunities for human formation and development that the Salesians offer them, so that they can enter the world of work with skills, make their dreams come true and fulfill themselves as people.

All the photos of the visit are available on ANSFlickr.