Mexico - "We hope you live among us as a Christian, bishop, father and friend of all" 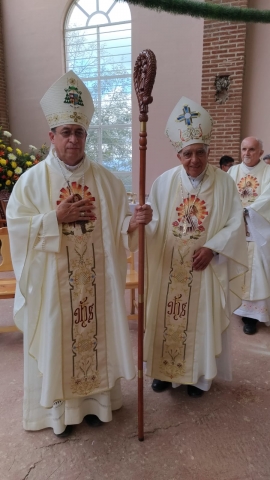 (ANS - San Pedro and San Pablo Ayutla) - Yesterday, Thursday, 2 August, the celebration of the episcopal ordination of Fr Salvador Cleofás Murguía Villalobos, Salesian of Don Bosco, took place. It was last June 13th when L'Osservatore Romano published the news that Pope Francis accepted the resignation of Msgr. Héctor Guerrero Córdova, SDB, as bishop of the Prelature of Mixes, due to his having reached 75 years of age, and communicated, at the same time, the name of the new bishop: Fr Salvador.

Episcopal ordination is a Church event and also an encounter with the people and with the faithful for whom a bishop is ordained. On the morning of 2 August, Msgr. Murguía Villalobos entered the site of the celebration accompanied by Msgr. Guerrero Córdova, and received, at every step, wreaths of flowers from those present, indicating their affection for the new pastor.

The first words of welcome were those pronounced by the mayor, Arturo Galván who, in his native language, said, "the population of San Pedro and San Pablo Ayutla Mixe gives you the most cordial welcome, Msgr. Salvador!"

Since yesterday, Msgr. Murguía Villalobos has therefore become the pastor of a prelature located in a poor and mountainous area consisting of 19 municipalities and 274 communities and a population of about 200,000: Mixes (70%), Chinantecos (19%) and Xapotechi (8%) , in addition to mestizos (2%) and Mixtecs (1%).

It is a region located in the northern highlands of Oaxaca with communities still isolated, from a economic, educational or social standpoint, but a people proud of their customs and traditions.

"We hope that you may live among us as a Christian, bishop, father and friend of all," were the words of welcome from the Temple Committee. "You already know that you have come to a vast and little known area ... But we shall by your side in bringing the Word of God."