Bolivia - "Scholas Occurrentes": the university must educate to be "better for others" 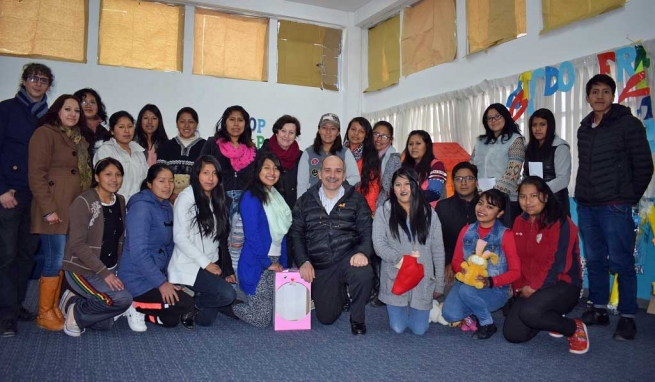 (ANS - La Paz) - In order to cultivate a culture of meeting, that is the encounter with others, for peace through education, Pedro Rosario, of the University of Minho in Portugal, and Sonia Fuentes, of the University of Chile, have reached the Salesian University of Bolivia to share the educational experience of the "Arco Iris Project" (Rainbow Project), one of the programs created by "Scholas Catedras".

"Scholas Occurrentes" is an organization of civil society founded in Buenos Aires in 2001, when Jorge Mario Bergoglio was the city's archbishop. The visionary idea of the then archbishop was to transform the world into a hall without walls, where all children were integrated and in peace, and "Scholas Occurentes" was established with the aim of educating children to the commitment for the good common.

Today, supported by Pope Francis, "Scholas Occurrentes" seeks the commitment of all social actors to cultivate the culture of the meeting for peace, and works with schools of all religious and secular confessions to re-establish an educational pact.

One of the departments of this institution, born a few years ago, is "Scholas Catedras", aimed specifically at universities. In this context, the university institutes have been invited to promote various projects among vulnerable populations.

This is how the "Arcoiris Project" was presented, a training proposal aimed at educators and teachers to work together with children of 8-9 years of age on self-learning processes, preparing them to face tasks and work to learn with greater quality and depth. The project's guiding tool is the aid "Travesuras del Amarillo."

Prof Rosario reached La Paz to invite the Salesian University to be part of this dream supported by Pope Francis, who tries to give reasons for hope to the children and young people of the world and urges them to integrate into a culture of peace starting from involvement in the dynamics of learning.

In the conference organized for teachers and managers of the Salesian University, Professor Rosario said that the challenge of a university was to train young people to be "better for others", and not just "to be better" to compete with or against others.

The Salesian University hopes that this dream, painted with the colors of the rainbow, will become reality in Bolivia, in the near future, and that the Bolivian children and young people can be part of this worldwide commitment to peace.