Brazil - Rector Major: "If at least one young person has changed their life, we are building a story of salvation" 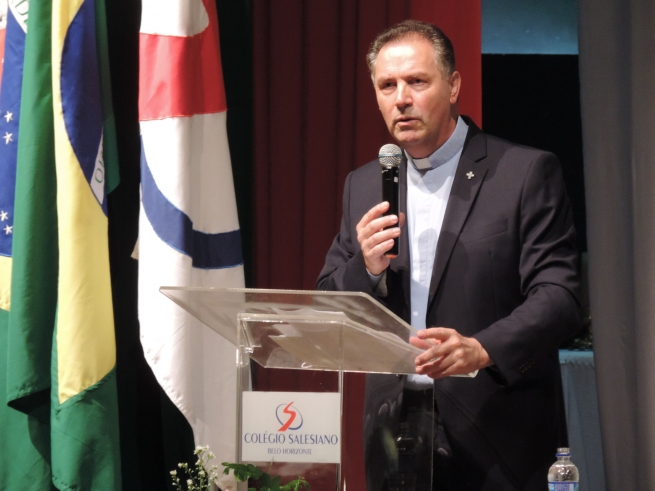 (ANS - Belo Horizonte) - The days of the Rector Major in the "St Giovanni Bosco" Province of Brazil-Belo Horizonte are full of activities. On the morning of Tuesday, 7 August, Fr Ángel Fernández Artime took part in the International Salesian Congress on Education, which brings together a large number of educators to reflect together on issues such as Education, Administration, Entrepreneurship and Innovation.

The activities of the day opened with the Eucharist presided by the Rector Major and concelebrated by the priests of the Province. In the homily, Fr Á.F. Artime stressed the importance of seeking authentic happiness and the wish that every Salesian educator impact the lives of young people. "If at least one young person has changed their life, we are building a story of salvation," he said.

The Rector Major then gave an interview to a troupe of "Canção Nova", one of the groups of the Salesian Family.

As part of the Congress on Education, he insisted on the need to "listen and accompany young people... Many young people need us, but sometimes they do not know how or do not have the courage to say, 'I need help'. This is why Salesians and educators must have open eyes and attentive ears, as did Don Bosco and Mother Mazzarello."

"We have to be friends with young people," he continued. "Sometimes they need a word that is the word of a 'father' or a 'mother'. On many occasions of my Salesian life I have been able to see the young people who needed my help as a 'father'. This is the art of listening and accompanying."

Then, in the afternoon, he visited the "Don Bosco House", which welcomes children aged 12 to 17, and with his paternal style, he spoke and joked with the children, listened to their stories and encouraged them to continue studying.

Later he returned to the Congress where he participated in a cultural evening, which included performances of music, dance and theater produced by teenagers and young people from Belo Horizonte and Pará de Minas.

Yesterday, 8 August, the 10th Successor of Don Bosco concluded his visit to the city of Belo Horizonte with a Eucharistic celebration for the Salesians of the Province. Then he reached Brasilia where he participated in the presentation of the first two volumes of the "Biographical Memoirs" translated into Portuguese, and had a meeting with members of the Salesian Family.

All the photos of the visit are available on ANSFlickr