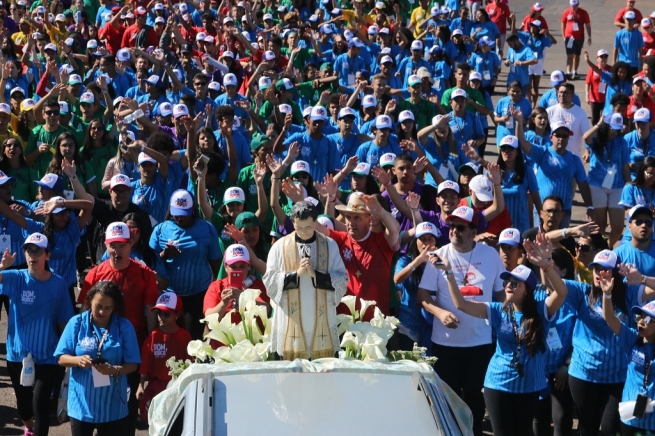 (ANS - Brasilia) - A long celebration with young people, in homage to Don Bosco, he who first dreamed of the city of Brasilia. In this way the Rector Major, Fr Á.F. Artime, spent the last days of visiting the Brazil-Belo Horizonte Province, spent entirely in the national capital, Brasilia.

Thursday, August 9th, accompanied also by his Secretary, Fr Horacio López, by the Counselor for the America South Cone Region, Fr Natale Vitali, and by the Provincial, Fr Carlinhos Fistarol, Fr Á.F. Artime was greeted with great enthusiasm at the airport by educators and Salesians active in Brasilia.

On Friday, August 10, the Rector Major first met with his Salesian confreres, while in the afternoon there was a large meeting of Salesian youths with the 10th Successor of Don Bosco, with about 2000 boys and girls taking part.

In the Shrine of Don Bosco, Fr Á.F. Artime gave a solemn opening to the event through a Eucharist that also served to deliver the missionary mandate to some young people who will be at the service of the Salesian mission in Angola. "Young people must remember to do good to themselves and to others," said the Rector Major in his homily.

The evening party that followed, marked by artistic performances of the various delegations present, ended with the words of the Director of the Don Bosco Institute, Fr Anselmo Nascimento. "On such an important day, there could be nothing better than the presence of the Successor of Don Bosco to show our young people some of our dreams."

The following day, Saturday 11, Fr Á.F. Artime spent entirely with young people. He met them at the Shrine of Don Bosco - where he also paid homage to the relic of the saint there preserved, for the faithful of all South America - and offered them a catechesis, accompanied by a Question and Answer session with the young on the theme of vocations. In the evening, he presided over Mass for them and participated in the prayer vigil that the young animators then continued throughout the night.

Finally yesterday, accompanied by the Salesian Family and by all the young Salesian animators, the Rector Major led the procession that escorted a large statue of Don Bosco from the city cathedral to the shrine dedicated to the Saint of Youth, where he presided at the concluding Eucharist of the visit.

All the photos of the visit are available on ANSFlickr