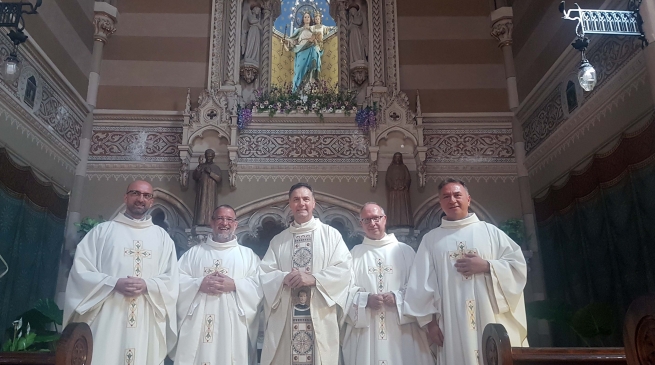 (ANS - Castelnuovo Don Bosco) - On the gentle hills of Asti, the days of mid-August are not just a time of rest, but also an occasion for commemoration and gratitude. Because on August 16, 1815,  Giovanni Bosco was born in the "Becchi" hamlet of Castelnuovo d'Asti, today Castelnuovo Don Bosco, from a peasant family, a boy who at the age of nine had that well-known dream that marked the entire course of his life and his works. This year, the anniversary of Don Bosco's birthday also marks the celebration of the 100th anniversary of the "Shrine of Mary Help of Christians" and of the inauguration of the first Salesian community at Colle Don Bosco.

For the occasion, the community of Colle Don Bosco prepared a special feast, embellished by the presence of the 10th Successor of Don Bosco, Fr Ángel Fernández Artime, who has just returned from his visit to the Brazilian Provinces of Porto Alegre and Belo Horizonte.

The celebratory activities began yesterday, on the Solemnity of the Assumption of Mary, with a Mass presided by the Rector Major at the church of the Madonna del Castello located in the heart of the ancient village of Castelnuovo Don Bosco. During the celebration several young people also pronounced a prayer of entrustment to the Blessed Virgin and to Don Bosco.

This morning activities began with a meeting at the Colle on the theme: "Three lights on the first 100 years of the sanctuary" which was attended by the mayor of Castelnuovo, Dr Giorgio Musso, the architect Carlo Faccio, Fr Ezio Orsini, Rector of the Sanctuary, and Fr Moreno Filipetto, as moderator.

Fr Á.F. Artime then presided over the solemn concelebration in the Basilica del Colle. During the homily he invited the faithful to live the anniversary and devotion to Don Bosco with that deep sense of gratitude that arises from the recognition of the Grace received through the Holy of Youth. "Children today also need Salesians. They need to find us in their midst. Don Bosco must be lived through the centuries. From the sentiment of gratitude we must go to being Don Bosco today," he said.